... finally premièred and, surprisingly, it's pretty good. After Michael Bay's now-shelved script for his live-action TMNT threatened to tea-bag every fan's childhood (welcome to the club, motherfuckers), this must be a pleasant surprise to those with an unhealthy fascination with humanoid animals that know ninjitsu. 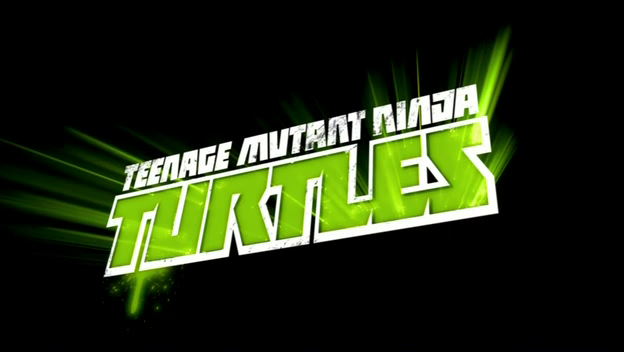 I mean those who don't read the comics, anyway, which I hear are actually pretty damned good.

Having said that, I'm not certain Nick's new Turtles are something hardcore fans will be able to appreciate, despite all that it's got going for it.

For one, it takes its tonal cues from the 1980s cartoon, which people in their late-20s now remember fondly, but fans hate for being (and let's not mince words) so bloody stupid. Hell, I'm not a Turtles fan and trying to watch a couple of episodes a few years back made me ponder putting a kettle on my head and declaring war to everything that's green, ridding the world of lettuce while I'm at it. 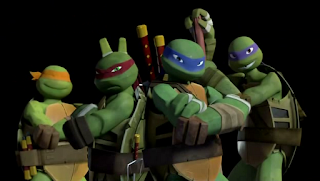 Then the warning signs for me were the rap rendition of that show's theme song, a crime I thought extinguished after "Transformers: Cybertron" and "Power Rangers: Operation Overdrive" showed the world what a monumentally bad idea that is.

Or how about the CG animation that every cartoon uses these days and it's annoying, because it's limiting both in terms of range (and what you can do with it without wasting half the studio's budget) and artistic value (plastic is plastic with or without bloom effects).

I was surprised more than everybody else upon watching the premiere to find out that the theme song is ridiculously catchy, the animation exists to serve the show's comedic approach with many simplistic touches on the CG that add flavour and spark and the aforementioned tone is very fitting.

Actually, that's one point where fans and myself never quite agreed on. I never saw the more "grounded" 2003 Turtles cartoon (or the '07 animated movie) and while I appreciate Eastman and Laird's intent with their characters, I just could never buy the original setting and tone of the gritty urban crime drama/noir when the heroes are turtles that talk, walk and know martial arts.

This isn't really a slight against the creators, as the books I've read are actually pretty good (and the lack of colouring helps a great deal in suspension of disbelief), but in animation I just can't see it working.

The new show is very heavy on the comedy. It can't go thirty seconds keeping a straight face, without throwing a joke at you and fair warning: this isn't a show made to be enjoyed by everyone. It's very much a children's show, with humour designed to appeal mainly to children. 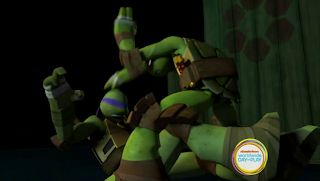 Fortunately, the humour may be very juvenile, but it's not stupid like it was in 1980s television. It doesn't so much talk down to kids to make them laugh, as it employs the best tried-and-true tricks on the book. Some jokes are naturally better than others, but the whole thing employs a very theatrical sense of humour; that's the slapstick and absurd one-liner type of comedy you'd see in old Bugs and Duffy cartoons.

Honestly, it works really well. The scene in the first episode when the Turtles are top-side for the first time had me in stiches.

The other reason they work is structural. This is one of the few cases that I recall that the Turtles are kids and they act like it. Mickey's stupidity is a lot easier to swallow when he is acting like the child that would act stupid.

Actually, Mikey doesn't act stupid, he just acts like the youngest of them all. All four Turtles once again employ their basic character archetypes, they just give them a bit more dimension.

Leonardo is the most mature of them all, an obedient son to Splinter and caring brother to the rest with hero fantasies of his own.

Raphael is the psychotic one with a pretty bad temper. He can get a bit much, but he stands to receive the most development. His pet turtle probably hints to his "softer" side. I hope so anyway, because it otherwise says all sorts of weird things about him. I mean, I don't keep any pet humans around. Just a few sex slaves, but they don't really count.

Donatello is the science nerd and probably the worst fighter in the group, though not by much. His shtick is that he has a humongous crush on April (O' Neil, who is a teenager here) and he's, naturally, too shy to deal with it. 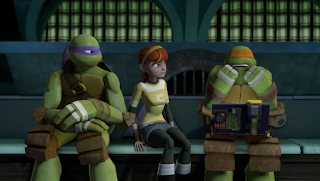 Michaelangelo isn't burdened with being the "comic relief" character this time around, so essentially he's your younger brother. You know that brother, who's 5-10 years younger than you are and he says stupid things and makes stupid jokes and pisses you off and you give him a hard time occasionally, but you love him, but you don't want him to know? That's Michaelangelo; young, enthusiastic, with a burning desire to make friends outside the sewers.


Four episodes in the subtext is thin and progressing slowly, but at least there is some. The show's main focus so far seems to be partly on the brotherly relationship between the Turtles (more than I have seen it in other interpretations) and the heroes slowly learning the world outside of the comfort-zone of their sewers. Yes, it's one of *those* stories about growing up and becoming part of something greater. And it's also about family.

It seems to be getting to its point very slowly, which may backfire in the end. The new "Thundercats" showed us you can get shit-canned well before you even get your overarching plot or character-arc underway. 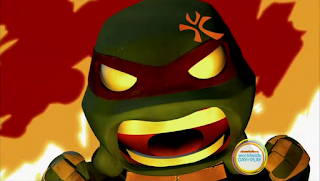 But there's plenty of good in it. To be honest, I can't see what it possibly has to offer to hardcore fans. It doesn't do anything particularly new or at least exciting. It's a kids TV series that will give offer the little ones plenty of laughter and their parents lots of crying with the toys it will inevitably sell despite its action sequences ranging from "boring" to "indecipherable because of budget".

If you happen across it though, do have a look. It may not peak anybody's interest if they're over the age of 12, but it's a good, very funny, weekly time-killer.
Αναρτήθηκε από GamelyPlanet στις 5:26 PM