A few thoughts on "Star Trek" (The Original Crew)

I knew Star Trek from a few episodes of The Next Generation I happened to see when I was a kid and from the license's pervasive status in pop culture (as well as its significant contributions to sci-fi and geek culture). Don't underestimate that latter bit; I went into The Original Series knowing full-well the names and even the personalities of the original crew, a few stories, KHAAAAAN and more, without ever having seen a single clip from that show. I picked all that up simply by existing. 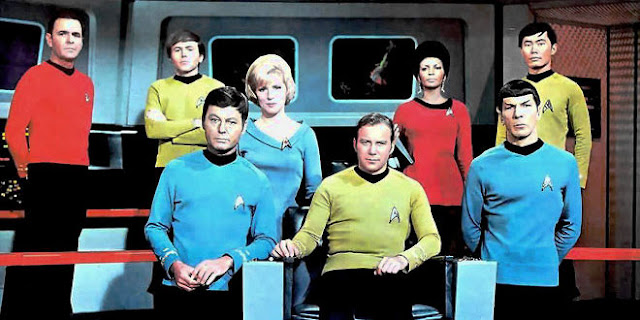 Star Trek (later dubbed "The Original Series" by fans) premiered on September 8, 1966 on NBC and and lasted for three seasons. The show told the stories of the crew of the Starship U.S.S. Enterprise and its ongoing mission to explore new worlds and "go where no man has gone before" (as the iconic intro stated). It was a show about a hopeful future, where mankind has conquered much of space and seeks to learn more about the Universe in a never-ending search for peace, truth, friendship, beauty and all that.

When I finally started watching the series, I was surprised to find a show that was genuinely good. The stills of horrible rubber monsters and shiny suits had given me the impression of something ridiculously cheesy and while the series isn't entirely foreign to smelly dairies, there was nothing invasive that detracted from the show. Apparently, Gene Roddenberry (the creator of Star Trek) and the rest of the writing crew set out to create a meaningful, multi-layered science-fiction experience-- with a good dose of action and intrigue; it was TV, after all.


I don't find much of a reason to review a fifty-year-old series that everyone and their dog is familiar with to one extend or another; but I do want to express my admiration for what they were trying to do. I'm hard-pressed not to call the show dated in some respects, but it holds up and especially the first season. The fast pacing manages to maintain viewer interest, but it's not just mindless pop-corn fun. There is a fair amount of philosophizing and push for social change that resonate even in our societies. The most dated thing about it, outside the effects of course, is the representation of relationships and especially the dynamic between men and women. The society of The Original Series is supposed to be completely egalitarian, but it's clear that some dated roles creep into the show. I'm not making claims of sexism or inequality; when I say dated, I actually mean dated. Females from all over the galaxy act like traditional 1960s ladies and males quickly fall within the limits of their own pre-determined gender roles as well (strong, warrior-like, occasionally assholes). Watching this in the 21st Century is just very striking, it sticks out like a sore thumb, way more than any bad phaser effect or fake alien suit or blackface Klingon.

That's literally the only thing I would genuinely call obviously dated and somewhat distracting. The special effects work within the context of the show, they're not too jarring considering everything else in it. Personally, I was impressed with the set-designs and especially for the Enterprise; I love how clean and bright it is and not in that white, sterile way of the new, J.J. Abraams, Star Trek movies that the whole thing looks like it's taking place aboard an iPhone.

I admittedly already knew that Star Trek is defined, largely, by its philosophizing (it's what Trekkies throw a lot at the Star Wars fans, in that inexplicable, never-ending war between the two fandoms), but that can be said about a lot (most, I'd argue) science-fiction from its inception to the modern age. I was still surprised at how genuine said philosophizing was in The Original Series. I expected it basic, elementary and outdated, but I found most of it connecting and relevant. A lot of the show also promoted science (though that is definitely basic), combated xenophobia and racism and promoted egalitarian societies and ideals. One of the staples of the franchise, the so-called "Prime Directive" existed as early as The Original Series and, in essence, it's very anti-imperialistic (as it states a prohibition of interference with alien populations and commands respect for their customs and ways of life). Not that 'Murica didn't make its occasional appearance; after all, the go-to super-villain of The Original Series, the Klingons, were made to reflect the communist regime (and it shows). Even so, such parallels weren't made with the intent of perpetuating prejudice and hatred, but mostly as a means of critique. Ultimately, the show's focus had always been in the reconciliation between different cultures.

I was surprised at how much I grew to like the characters, too. TV was exclusively episodic at the time, without cross-episode (let alone season-wide) storylines. In 50 minutes, a story started and ended and that was it. This is a double-edged knife when it comes to character development. It offers the opportunity to focus on single characters and explore them, but it robs them off the opportunity to react to raised stakes and flesh them out as part of a larger universe in which they are relevant.

The Original Series wasn't big on character development, but over three seasons it managed to define its main cast well enough, particularly the three main stars: Kirk, McCoy and Spock (and maybe Scotty, to a lesser extend). It's hard to say any of them were developed; they were the same people in the last episode that they were in the first. But through their adventures and interaction, the show succeeded in defining and fleshing out their personalities.

Honestly, I believe that given enough determination, one could do entire psychology and character studies on Kirk alone, a character that's built to be the classic American hero of the future, but who -I believe- has the capacity for a lot more layers than it would seem at first glance. So, I'll only say this: in creating a burly hero that punched bad aliens in space, the writers set the foundations for a deeply flawed and engaging character that, unfortunately, never fully realized his potential.

I also watched the original crew movies, numbered 1-6. I don't have that much to say about those. The show went off-the-air on 1969 and it was resurrected in the film series, with "Star Trek: The Motion Picture" premiering in 1979. It makes sense; sci-fi had started changing as had the world after The Original Series left the airwaves. The success of sci-fi now-regarded as classics in the late '70s, like Superman: The Movie and, of course, The Star Wars (later renamed "Star Wars Episode IV: A New Hope") clearly inspired carrying on with the Star Trek movie series, which added to the success of the show's reruns throughout the '70s (reportedly much higher than the ratings during its original airing).

The films differ significantly from the show aesthetically and even from a narrative standpoint. Out of six movies, four are at least watchable, which was a bit of a surprise in itself. The first movie is a dull-fest that can be skipped entirely without a single thing being lost within the cannon. The fourth movie (subbed "The Voyage Home") is also a bad, campy sci-fi... thing that relies on bad tropes of the era (space people in contemporary California in crazy hijinks and, for some reason, space whales). The others are more or less okay, not exactly space-epics, but ultimately enjoyable.

The only one that stands out is, of course, Star Trek II: The Wrath of Khan, which is still regarded as the best Star Trek movie out there. I won't go into details about what makes the film work (though I will say that it totally holds up and you should see it, if you haven't), but it does seem to be a very defining moment in Star Trek history. Though the first movie also changed a few things from the show, it was The Wrath of Khan that defined the direction of the franchise from that moment on. The Original Series holds up well-enough, yes, but it's the only show in the franchise that feels entirely alien to everything else, as if it exists in a vacuum, as if it's part of a different license altogether. Star Trek II is the bridge between the original crew and everything that followed. Things like faster action, better crew structure, more Starfleet involvement, expansion of the Star Trek universe, consistent continuity and even colors, set-designs and overall aesthetics are things that The Wrath of Khan cemented. Without it, the original crew would probably be treated like a relic, perhaps worthy of respect for its contributions to science fiction (and science in general), but ultimately irrelevant. Star Trek II remedied that and connected the now-standard Star Trek experience to that original crew that started it all.

I also want to, personally, give a nod to Star Trek V: The Final Frontier. A movie that often feels like a comedy about a bunch of old people, it ultimately works because it focuses on characterization more than most Star Trek material before it.

Catching up on long-running series is an investment that many of us risk a lot on, especially as we get older and are only allowed very little leisure time. Doctor Who has been trying my patience, because despite its stellar quality, its pacing is slower than that of an epic of classical literature. Star Trek has yet to truly waste my time and, in the end, I'm more than happy I undertook the task of sitting through one of the most defining (I'd argue the single important) modern science-fiction series in pop-culture. As Star Trek VI concluded, I realized I would miss the old crew, Kirk and Spock and McCoy and Scotty and Uhuru. I'll even miss Sulu and Chekov and the old U.S.S. Enterprise and I will reminisce about their adventures as if I grew up on them.

Now, on to The Next Generation!