"Superman vs The Elite" : The spoiler-free review (Part 1)

A few years ago, the very successful Warner Brothers Animation studio decided to expand their super-hero-themed universe with direct-to-DVD films, in content both original and adapting celebrated comic-book storylines.

The endeavour didn't just offer a good follow-up to the deflation of the super-hero Hollywood craze of the later years (before The Avengers, anyway), but it also offered a great outlet for making some of the better story-arcs from the comics known to a mainstream public, of all ages.

Since the line launched in 2007 there have been fourteen films, some better, some worse, most of them adaptations, but only a bare minimum could be considered "worthy" of the source material. The challenges the developing/production teams face are understandable, but by "Batman: Year One" and "Justice League Doom", the entire thing was becoming tiresome. The films felt soulless, one forced, painful 60-minute-mandate after the other.

It is because of the above that I am entirely stunned by the newest release "Superman vs The Elite"; not just one of the better films of this series, but (thematically) perhaps the best Superman film ever made. 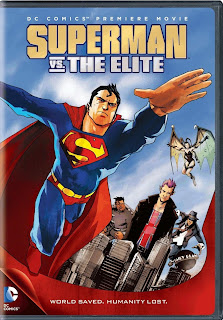 I don't say this lightly. My opinion is coloured with bias, as I am a pretty big Superman fan and technically there are better films in this series, but none do I remember that is more important on a thematic level.

The review will be split in two parts: this first part will touch on the film and offer a recommendation based on bare technicalities and in the second part I will elaborate on the story's subtext, its inspiration from and impact on society and why it makes this the best Superman film ever made.

"Superman vs The Elite" is the adaptation of Action Comics #775, titled "What's so funny about Truth, Justice and the American Way". The issue was published with a cover date of March 2001 and was penned by then "Action Comics" writer Joe Kelly.

The story is simple: a new group of heroes called "The Elite" show up and take it upon themselves to clean up all that's bad in the world by any means necessary. That means killing indiscriminately anyone they deem evil. When Superman sees the values and the example he tried to lead by for years trashed, he stands against them.

At the time, Kelly was reading "The Authority", a series where super-heroes were the biggest assholes in the Universe and he wanted to have Superman take these guys on. That's how the story came to be.

The book is perfectly adapted to film, thanks to a number of "blessings" this particular movie enjoyed: the adaptation itself, including the writing of the script, was done by Joe Kelly himself. More than that, unlike other adaptations that have to forcefully cram entire multi-book story-arcs in a little over an hour of moving pictures, "Action Comics #775" was just a single, 24-page-long issue story.

This doesn't automatically mean success, of course; twenty-four pages don't give more than ten minutes of screen-time at best. But Kelly does a magnificent job in, not padding his original story, but instead expanding upon it. As he put it "there are so many things happening between the panels" and these things he puts front-and-centre here.

In addition to the above, the story now also features a secondary super-villain that adds two extra fight scenes that didn't originally exist. Kelly wanted Parasite, who fit the film thematically (stealing power and then abusing it), but they had to settle for the Atomic Skull. I admit, even I'm not very familiar with the Skull, but his use in the movie, something that could've betrayed a desperate need for material to fill up time, is absolutely ingenious.


The story remains simple: newbie heroes show up, they lose their way, world's oldest and best hero has to set them straight. There is a lot of philosophy involved and it does a great service to Superman as a character and the reason why he has endured after decades, despite the constant criticism by the anti-hero audience over his clean-cut looks and morals.

The Elite is strongly juxtaposed to Superman, with the former taking it upon themselves to fix the world and the latter trying to lead it by example. The struggle ties directly to western society's psyche, our ideas about justice and our complacency in letting or expecting others to create a better world for us, as reinforced by the events of the last decade. (We'll elaborate on these on Part 2) Whenever the film slows down, it packs some great emotional beats, especially in the relationship between Lois and Clark/Superman.

The animation is pretty bad. It feels cheap and it's often-times inconsistent. It's possible they were trying to cut corners, but I genuinely think it was an aesthetic choice. The designs appear simplistic and very 'cartoon-y' in nature, drawing from the more innocent time of comics, when they were primarily directed at kids and heavy-handed concepts and cynicism were nowhere to be found in their pages.

Sadly, this choice backfired as everyone looks a bit odd and especially Superman himself. That's not to say it's an ugly cartoon. It's not good-looking, but it has its merits, namely the action sequences that flow nicely. There is a sequence with Superman disarming and destroying a squadron of fighter-jets and I have to admit, it's probably one of my favorite Superman action scenes out there.

There are other tiny issues with the visuals, mainly that the characters seem to always wear the same damned clothes. It's common in comics and cartoons, but it's fairly distracting when two different scenes inside Lois and Clark's apartment seem like they take place in the same day, when they happen at least one day apart. Or that Lois' clothes when working are all the same, over the course of several days.

I'm also not crazy about the design of the Fortress of Solitude. It looks like somebody drew random lines and then somebody else painted them crystal-white.

The animated feature fairs quite well on the sound department. The cast is great; George Newbern is reprising his role as Clark/Superman from the Justice League cartoon and he probably gives his best performance-to-date in this role. I never quite warmed up to him back in JL/U, but I was finally sold here. The adorable Pauley Perrette of NCIS fame lends her voice to Lois Lane. She turns in a solid performance, but it doesn't help her range that her NCIS character Abby, Lois and Pauley herself share the over-excited, hyperactive personality aspect.


Robin Atkin Downes voices Manchester Black, the leader of the Elite and does a fantastic job with him. Downes is one of those actors that can mask his tone and voice and make himself truly sound like different people. Considering the slew of voice acting material he has in his resumé, one of which we all must've heard by now, it's a blessing he's capable of this. Last thing I'd want is hear Manchester and think of Kazuhira Miller.

Past the all-around-great acting (save for some minor roles with very bad English accents), sound and music felt mostly competent. Unnoticeable is the worst thing one could say about them, with the exception of the great intro credits (the entire audiovisual result that seems to celebrate Superman's history in comics and animation) and the "Superman theme" they reuse from "Superman: Doomsday".

"Superman vs The Elite" is one of the better films in this line. It may contain a tad too much dialogue and philosophy for younger viewers, but there is a lot for older audiences, comic book fans or not, to like. I wholeheartedly recommend it.


Now that we're done with the silly review, let's talk about the meat of the story; the subtext, the philosophy and the social critique of the movie.