One has to be impressed with the longevity of the LEGO crossover video games. They're pretty standard affair nowadays and they are certain hits on the charts, but has anybody ever realized what they are in essence?


LEGO got an unknown developer, Traveler's Tales, to adapt their toyline's crossover with big movie licenses and make decent games off of them.

And they did it! Since 2005 the LEGO X franchise has been strong, starting with Star Wars, moving to Indiana Jones, Harry Potter, Pirates of the Caribbean and Batman. Movies-to-games are almost always a disaster and toys-to-games fair even worse, but Traveler's Tales has been producing strong titles that are both for over seven years now! 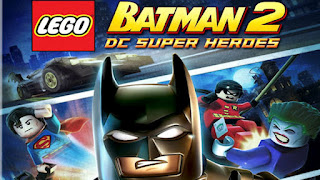 Their latest release, "LEGO Batman 2: DC Super Heroes" is their most ambitious project to-date; it's the original sequel to an original game, i.e. not one following after pre-existing material such as a movie.


I'm of two minds when it comes to this entire series and this applies to the latest installment as well. On one hand, I'm more than a little perturbed that in seven years the series hasn't changed a bloody thing in the way it's played. There are a few additions and neat tricks here and there, but for the most part the game-design is identical in all of these games.

On the other hand, it's hard to be mad about this. They are all pretty insubstantial and "if it ain't broke don't fix it", but they always play on their strengths-- and these strengths don't include gameplay.

There is something deeply nostalgic about revisiting favorite properties through the eyes of adorable LEGO figurines in a world made of colored bricks. TT Games always licenses the soundtracks of these properties and recreates entire scenes from the movies the games are based on.

Their ingenuity hides in the fact that all the titles are family friendly without becoming exclusive to kids. An entire family, of whatever age, can sit down and enjoy them, with the older people reminiscing their youth through nostalgia and younger players just enjoying the simplistic gameplay and accessible humor.

If it seems like I'm stalling talking about LEGO Batman 2, it's because there isn't much to say about it. If you've played one of these games, you've played them all. Go around linear levels, break blocks, collect coins, beat iconic villains, team up with a friend and solve puzzles.

The same problems that existed before are still there; unlocking stuff requires coins and finding coins requires endless grinding. The controls are a bit off in certain places and thanks to the camera, some jumps are deathtraps, because when your entire world is made of monochrome blocks, depth-perception isn't as well-defined as one would think. 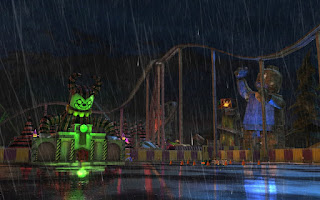 But these are small details that don't really detract from the game. The levels are well-designed, the gameplay remains simplistic but engaging enough to maintain one's attention span and the game's flow is fast, not allowing for a moment's peace.

The different gadgets and suits make a return from the first LEGO Batman, requiring a deeper level of cooperation and adding a lot of variety in levels and this time, the universe expands by bringing in more super-heroes.

This was the game's most publicized new feature prior to release-- no kidding, it's in the damned title! The trap here is that you only get to unlock Superman half-way-through the story mode (and unsurprisingly he gets incapacitated toward the end of the game) and only get to unlock Wonder Woman, Green Lantern, The Flash and Cyborg one mission before the finale.

Since combat in the game is traditionally shit, their powers only exist to interact with the environment and solve puzzles. Prior to their appearance, the different Bat-suits fill for that role. Also unsurprisingly, none of the Leaguers is particularly useful if you have Superman in your team.

The story mode ends at roughly 20% total completion. Afterwards, there is free-play, the chance to replay story-missions and scout around Gotham City for extra coins, collectibles and to recruit more characters. Of course in "Free Play" you can revisit story missions using whichever unlockable character you wish. Even so, the game just doesn't make much use of anyone outside Batman and Robin (and to a lesser extend, Superman).

It's a Batman game, yeah, but after so much publicity on including the Justice League, at best this is just a trial run to make more DC Universe hero LEGO games. In fact, a teaser at the end of the story-mode may finally be hinting at the much-wished-for LEGO Superman game, likely to coincide with the release of "Man of Steel" next year, which is just as well; whatever you play of Superman in this game is probably the best Superman game ever. 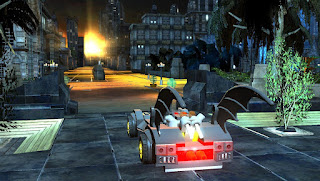 Visually, the characters look adorable, the environments look sharp and shiny, the animations are as fluid as blocky figures allow and the building, gadget and vehicles designs are actually pretty awesome. Seriously, if there are toys like these out there, I want them.

The audio is great too. This is the first game in the series that actually features fully-voiced dialogue for the story, as opposed to the other games' character mannerisms. I was as concerned as everybody else that the humor wouldn't translate as well, but I honestly don't think I can go back to the pantomime humor now.

The story isn't very smart, but it does its job; presidential candidate Lex Luthor makes a 'disintegrator' that tears apart things made of black LEGO blocks (like Batman's entire arsenal). He then breaks the Joker out of Arkham, so that the clown can synthesize his famous gas and use it on the voters to get them to vote for Lex.

Holes all around the plot, but not enough to bother anyone seriously, certainly not any more than your average Saturday morning cartoon. It even includes a number of cute in-jokes that comic fans will recognize.

The dialogue is pretty silly, but it's the endearing type of silly. I would compare it to the humor of "Batman: The Brave & The Bold", but they are actually quite different. In LEGO Batman 2, Batman is still every bit the dick he usually is; the humor lies in everybody pointing it out. The jokes are generally of the "parody" variety, at least when it comes to the heroes.

The voice acting is all-around solid and once again, the background music is none other than Danny Elfman's 1989's "Batman" soundtrack, with the main theme from "Superman: The Movie" taking over whenever you fly with DC's boyscout over Gotham.

And yes, if you have to be like that, I did giggle like a schoolgirl on meth when I got to shoot up into the sky with the John Williams' theme blaring in the background. 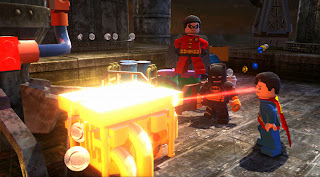 Nobody needs a recommendation from me. The game has been dominating the UK charts for weeks and for good reason; despite all the problems that it carries over from the lacking core design of the entire series, it's still a thoroughly fun game to play, especially with a friend and probably the best video-game you could get and play with your kids.

It may get a bit repetitive and tiring in solo mode, as you are tasked with doing everything on your own, but the presentation, the set-pieces and the puzzles, simplistic as they may be, compensate for the game's other shortcomings.

By the by, will anybody ever bring up the SLAUGHTERING of both villains and innocent bystanders in this game by the heroes, or do we pretend it doesn't happen  just because they explode into plastic pieces?

The Not-So-Good: Brings nothing new to the series in gameplay, navigating controls are kind of shit, campaign is a little short.