And the Great War still goes on...

... but a few interesting pieces of info show up here and there that raise an eyebrow or two.

We know that Megaupload was shut down last week on charges of copyright infringement among others (such as racketeering and money laundering), but as TechCrunch reports, there was another thing that certain people may not had wanted to see come to pass.

Kim Dotcom and his Megaupload staff were soon going to launch Megabox, a digital promotion and distribution service that would pose as a competitor to things like iTunes. The service had, in fact already launched, but it was still in beta, with a number of listed partners such as 7digital, Rovi and Amazon. 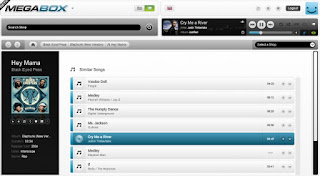 Why would that be bad? Well, for starters, Megabox would tap into Megaupload's established audience, which made it very possible it would succeed over competing services. The thing that caught my eye, though, was the fact that the platform would allow new, unsigned artists to distribute their work and get paid for it, bypassing labels and RIAA (and, if the service moved on to indie film-makers, MPAA as well).

I will remind you that the real reason behind SOPA and PIPA wasn't the protection of copyrights and intellectual properties, but established distributors struggling to hang on to their obsolete empires and vilifying an entire platform (in that case, the whole Internet) that allowed new ways of creative work and innovation. Let's not forget that Megaupload itself was popular among and endorsed by artists themselves.

In simple words, what Kim Dotcom and his staff did was take the entire music industry head-on. It landed them in prison.

The FBI did find chatlogs that supported less fluid charges, such as racketeering and money laundering; Dotcom is (or at least, was) a very, very rich man. But he was hardly doing anything that established distributors don't. I wonder when they will go down. After all, the White House said they would "look into" that bribery admission by MPAA CEO Chris Dodd, but I strangely doubt it will lead to much.


While all that corporate-war-disguised-as-something-noble goes on, Ireland and Poland have to deal with their own version of SOPA, which lead to protests last night. Good for you guys.

Also, Netflix considered offering game rentals. They changed their minds in a day. Do you know how much piracy you could beat with a digital rental platform for video games? You don't care? Yeah, I didn't think anybody really did.