RetroDEX: "Bioshock" ends not with a bang, but a whimper (Burial at Sea 1,2)

Irrational followed up Bioshock Infinite with two expansions. Bioshock Infinite: Burial at Sea features a return to Rapture and the world of Andrew Ryan through the eyes of Booker and Elizabeth. Released in two parts, Burial At Sea Episode 1 is a more conventional experience, whereas Episode 2 tries (and fails) to break the Bioshock mold.

The first episode features a more adult, jaded and seductive Elizabeth visiting Booker in Rapture. She gives him a job to find a Little Sister. There are references to the original Bioshock, some cameos, but it's a standard affair. The mechanics are the same as those of the base game and there's not much story to speak of. If 1930s adventure serials inspired Bioshock Infinite, then film noir-inspired Burial At Sea 1. 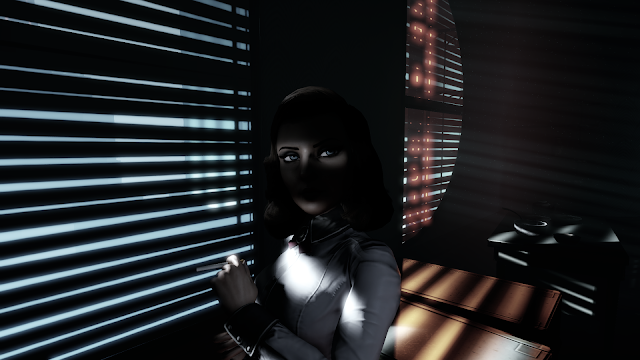 It's in the second episode where the thing goes off the rails. Burial At Sea Episode 2 is the single worst thing I have played carrying the name. Yes, I dislike it more than I do the original game. The game reverses Booker and Elizabeth's roles. Elizabeth is now the protagonist and Booker is the companion (albeit it via radio). This works well enough.

What doesn't work is the Levine just won't let System Shock 2 go. The man won't die happy until he convinces everyone that Bioshock is a worthy successor to that game. So Burial at Sea 2 features stealth-focused with an emphasis on hiding and doing silent take-downs. This works about it did in the first Bioshock it doesn't work at all. 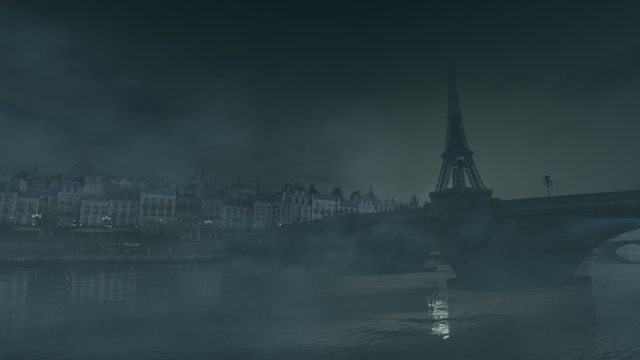 I'm a huge fan of stealth games. The methodical sneaking around enemies using the environment and a variety of tools, ghosting through a level with enemies being none the wiser for it; that's my bread and butter. From Metal Gear to Thief, I love this shit and Burial at Sea 2 takes some of its cues from the latter. I also think the stealth genre has been dead outside of Metal Gear Solid V for a very long time. Dishonored, also a Thief clone, was a disaster with none of Thief's finesse, elaborate mechanics or layered level design. Burial at Sea 2 reminds me of Dishonored a lot.

Elizabeth can't take on enemies, she has to stealth around them. She gets a crossbow and the skyhook which she uses as a melee weapon. Sneak behind enemies, hit them and knock them out. It sounds simple enough, but it's woefully boring and, honestly, of broken.

Metal Gear had its Soliton Radar for a reason. Thief has its shadows and invisibility gem for a reason. Elizabeth has a pair of loud heels which the dumb doesn't even think of taking off. She can sometimes crawl into vents. She has a crossbow with tranquilizer ammo, but it's very limited. Alternate ammo makes its return, but it's scarce and doesn't offer much freedom to the player.

Burial at Sea 2 pays tribute to Thief and adds surfaces that produce sounds of varying volume. When I ran into the first floor covered in smashed bits of glass, I chuckled. See, in Thief, walking over a loud surface is a cue to use a moss arrow or fuck off and find another route. In Burial at Sea 2, the maps are linear () and moss isn't one of the crossbow's alternate ammo.

In Thief, you put out torches and hide the shadows. In Burial at Sea 2, enemies will see you anywhere, so long as they can be arsed to hunt you down.

In Thief, the slow movement means you have time to consider strategies. You can consult your map, see the different paths to the , patrol routes and come up with a plan. In Burial at Sea 2, slow movement means that the game takes twice as long to complete for no good reason.

In Thief, if enemies discover you, you have flash bombs and hiding places to facilitate your escape. In Burial at Sea 2, Elizabeth dies in two hits and the guns are to the point of being ineffectual.

But Burial at Sea 2 is so much more complex than the base game because hacking makes a return! It's in the form of and Thief had ! That's what Elizabeth does, she , right? It's the perfect fit! Boy oh boy, have I not missed this shit!

The game plays like  and there's nothing else to say about it. But the story is a proper mess. 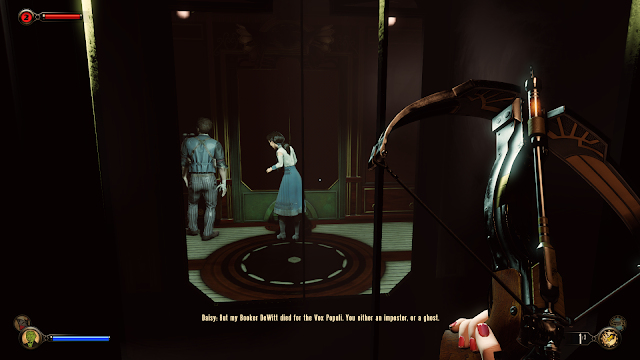 I won't go into much detail, there's no point. The opening is brilliant. Levine is exceptional at creating hooks, not only in terms of but also mere visuals. Unfortunately, the thing quickly devolves into a stupid mess of quantum physics and crossover scenarios that nobody really asked for. All of it exists to tie Columbia to Rapture and tell unnecessary prequel story to the original game. I'd call it bad , but often has tits.

Superfluous and a waste of time; that's the entirety of Burial at Sea 2. My reading of Bioshock Infinite's subtext by this piss-poor expansion. Levine has nothing else to contribute to this series. There is nothing else to say, no story to tell. Any attempt to do so, will only lead to a flavorless piece of gum of a story, meant to by nobody but the basest of Bioshock bimbos. There's nothing clever about the writing. There is no subtext worth analyzing here.

Elizabeth's character takes a beating, too. She is far from her sympathetic persona and her coming-of-age story. She has become an obnoxious, joyless asshole that's not nearly as much fun to listen to or play as. It's a pity because Courtnee Draper fucking kills it. She's one of the best (if not the best) voice performance this series has ever had and she deserves far better material than this.

and don't even get me started on the game's infuriating decision to whitewash Daisy Fitzroy! They had the audacity to present her as some saintly martyr, sacrificing herself for Elizabeth and the greater good. Even by the pitifully low standards of Infinite's -politics, this is a cop-out.

Fuck this game. Fuck this game and fuck that this was the swan song to a rocky, but ultimately unique series that once had an artistic streak about it. As much as I have shat on the series, especially that original game, there is a reason I've gone back to it so many times. There is something interesting and genuine about it, beneath the surface. But not with this expansion. Burial at Sea 2 feels hollow, nearly corporate and ultimately useless in the larger scheme. ﻿ 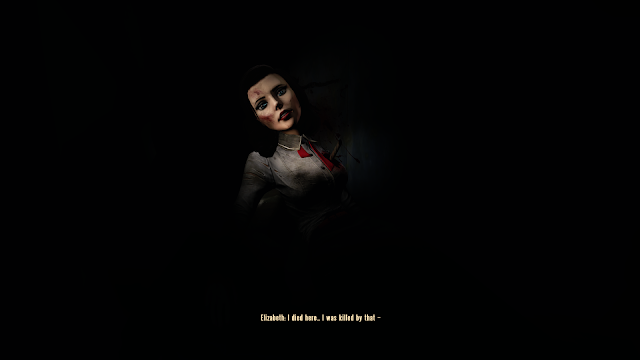