"Convergence" concluded and it was a massive waste of time

One of the reasons I enjoy DC more than Marvel is their scale, the more epic and mythical approach to super-heroes, usually nicely expressed via their "Crisis" cataclysmic events. Yet, after the boring but undoubtedly significant "Crisis on Infinite Earths", the enjoyable "Zero Hour", the genuinely good "Infinite Crisis" and the abysmal "Final Crisis", we recently got a new "Crisis" in the form of the Convergence crossover and, now that it's over, I can safely say that it was nothing. Air. Vapor. Invisible particles of cheap perfume in the air, that occasionally pleases the nose, but is utterly insignificant. 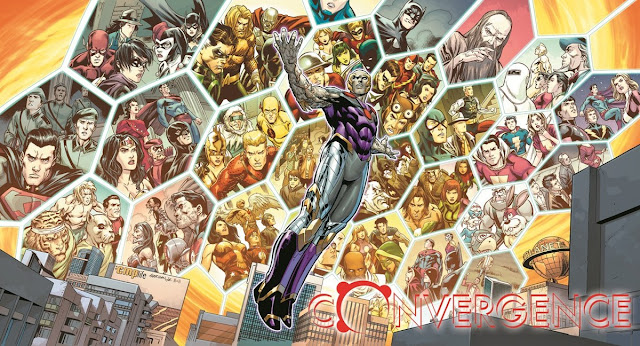 If you skipped the event, the base concept behind it was that Brainiac, the famed Superman villain that exists to gather information by bottling worlds and stealing their knowledge, decides to pit the worlds of the Multiverse (i.e. the collection of 52 parallel dimensions in the DC canon) against each other and force only one version to survive in the end.

So, in practice, Convergence had one book that ran for eight issues and focused on the event itself, whereas the rest of the DC line-up over the course of the last month was a number of tie-ins that featured different versions of heroes and villains, from different times and dimensions, clashing with one-another. It wasn't terrible in that it gave the opportunity for some nice revisiting of beloved versions, some satisfying send-offs and some experimenting with the more vague characters and versions thereof written by old, favourite writers.

I didn't read every single tie-in, but what I did read was widely inconsistent. The problem with a lot of the tie-ins was that, unless the reader had some particular investment on a specific version of the featured characters, most of them were forgettable. That wasn't necessarily the writers' fault, quite a few of those stories were quality material; however, the sheer volume of different versions of the same characters recycled multiple times within a single week buried the better books in my mind amidst the unnecessary information overload that followed the few seconds of nostalgic "aww" moments. Even the pre-New52 Superman send-off, which I was both invested in and I recall enjoying a lot (it was one of the genuinely good ones), I've mostly forgotten now. That aside, those familiar with timelines and continuities could also catch some holes and inconsistencies in the Convergence versions of those characters, like the oddly antagonistic relationship between Lex Luthor II and the Matrix Supergirl (from the early '90s Superman books), or completely botching the Red Son version of Superman (from the Mark Millar's great mini-series), or Parallax Hal Jordan (the infected psychopath that murdered all Green Lanterns and was replaced by Kyle Rayner) insinuating himself within the main Convergence book. I will, however, say that Wally West's brief return alongside his children and an anthropomorphic turtle speedster is one of the series' highest points.

The primary issue with the event, though, is that it was entirely unnecessary and led to absolutely nothing! At least I think it led to nothing, since I can't realistically be sure. Most of the eight issues of the main book revolve around the Earth-2 team, the Justice League from the book of the same name that functions as DC's on-going 'Ultimate'-type line. Their Earth is destroyed and they find themselves on an alien world, that of the being known as Telos (though Telos is technically the planet), Brainiac's servant in the inter-dimensional gladiatorial tournament. Character development is primarily focused on Earth-2's Dick Grayson, not a costumed hero in that continuity, who the writer assumes I'm supposed to know beforehand, even though I've never read the Earth-2 book. The plot takes Telos and pits him against an arch-nemesis of sorts and in the end other versions of the DC characters also show up in that world and they all fight until Brainiac eventually returns and backs off and continuity is reset. Or redone. Or merged? Brainiac outright orders the heroes to undo the original Crisis, i.e. Crisis on Infinite Earths. The way to do this is to not allow Barry Allen and Kara Zor-El of the pre-Crisis Earth-1 to die (their deaths two of the most iconic moments in the DC Universe). All of this is done off-panel. Yes, DC undid their biggest, most important event in the history of the company and they did it off-panel.

This is only my reading of the event, because it's confusing as hell, but as I understand it undoing COiE means that Barry Allen in the new books is now the same Barry Allen of the Silver Age. Similarly, the current Kara Zor-El is the old, Silver Age Supergirl, Superman, Batman etc are the same people they have always been and so on and so forth. Brainiac says that these characters didn't merely exist, but they evolved. In other words, DC just rebooted everything without rebooting anything and they opt for a continuity more like Marvel, which has been on-going for decades.

Again, though-- I think that this is the case. Badly-written mess all over the place this damned thing is.

If my reading of the event is correct, it really was a massive waste of time. I know there are people who dislike the reboots (I'm not among them) and I know that DC's New52 has had issues with regards to continuity, because what started as a hard reboot ended up as a fairly soft one with a vague continuity preceding the books. With tying everything together, DC maintains the Multiverse (in some form, at least) and either spares itself from building new continuity (if everything in the last seventy years is in) or it invites a lot of scrutiny by internally inconsistent world-building.

Even then, Convergence really doesn't have any practical use because, for all intends and purposes, DC's current run is a fairly new continuity (only 4-years-old in real-time) and everything they build from this point on will be built in that same new continuity and will most likely not be able to reflect the aftermath of Convergence, because it doesn't matter. Some characters will get re-introduced with time, because that's just necessary and origins will be re-written and it won't matter one damned thing if these characters are just 'evolved' from the Gold or the Silver or the Bronze or the Post-Crisis Age. Nothing ventured, nothing gained and make no mistake; nothing has been ventured.

DC's major cosmic events have never been all that great. They've always existed to serve some editorial purpose, but a bunch of them at least took chances and earned their importance within the company's history. Convergence is the first time editorial took zero chances with the material or its impact in the universe. They risked nothing, they had some certain sales from the whole thing, perhaps some good will stemming from nostalgia and now they can continue the exact same way they had been going, because the event changed nothing of value.

I'm sorry, DC, but this was not an event. This was a holiday break. It was alright at first, but the whole ordeal became exhausting, hard to follow, just not all that entertaining and I can't wait until my memories of Convergence also "evolve" to the point they will collapse in and on themselves and disappear into the void.