New Who: "Into The Dalek"

Remember how I said Series 8 seems to be moving toward a show with different tone and pacing than what New Who has been since the relaunch?

Scratch that. Where "Deep Breath" is slow and introspective, the second episode "Into The Dalek" opens with a chase in space and has explosions all around. It's the Crash of the Byzantium all over again.

Actually, that's unfair, because the  Crash of the Byzantium was a stand-out two-parter ("The Time of the Angels", " Flesh and Stone") that was equal amounts awesome and terrifying, while "Into the Dalek" is just the second of episode of Series 8. 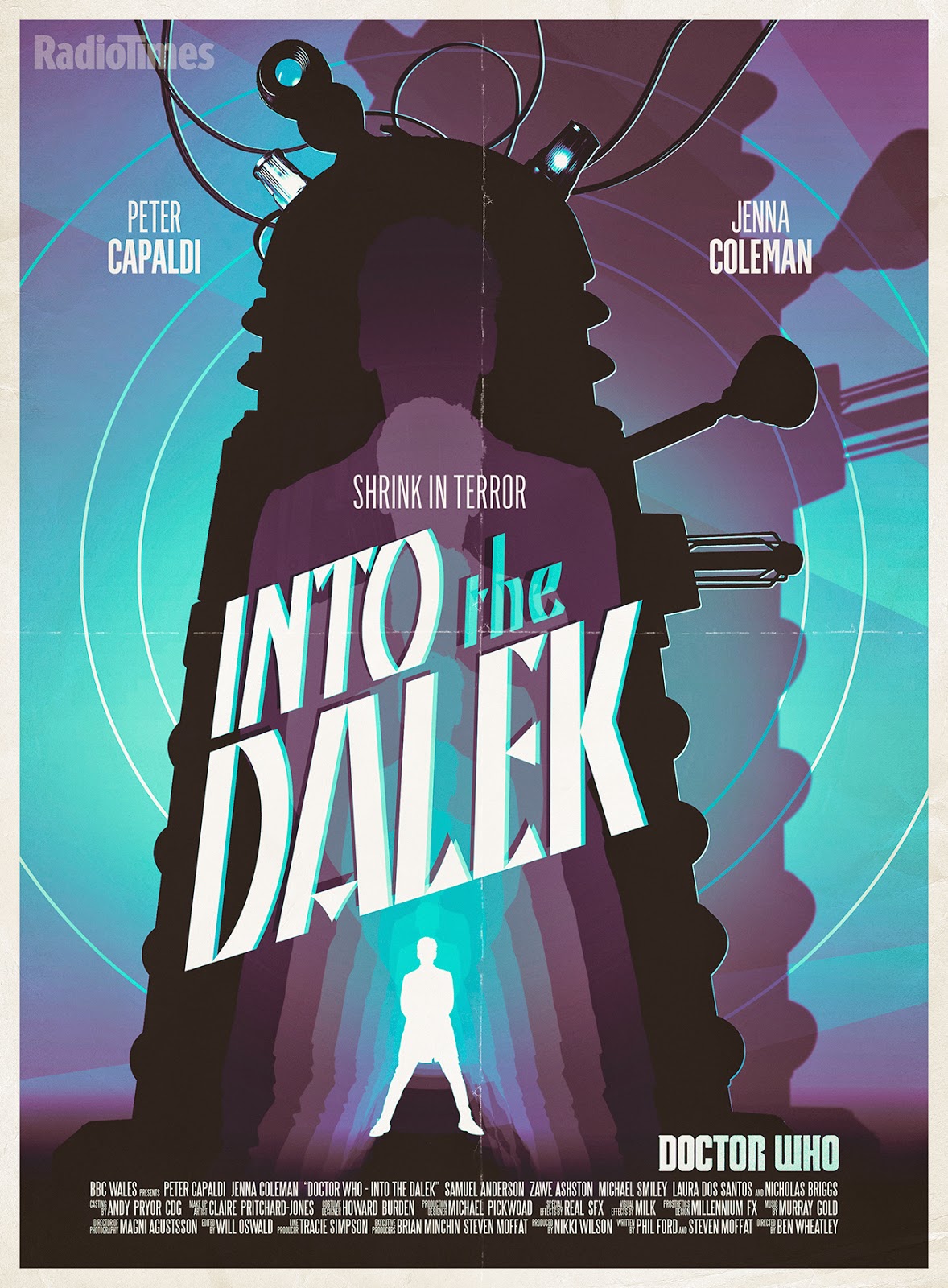 If it seems I'm being harsh on the episode, it's not because it's bad. It's mainly because now the show actively jerks me, as a viewer, back and forth. It took me two viewings of "Deep Breath" to get into what it was trying to set-up and "Into the Dalek" suddenly propels me back to the Matt Smith era.

But the show must be judged on its own merits and in that regard, it's a good episode. It's fun, it has good dialogue and drama that resonates.

The Doctor materializes the TARDIS around a rebel human soldier, before her fighter ship blows up. The rebels are apparently at war with the Daleks. The Doctor takes the soldier back to the rebel ship, but the rebels attempt to execute him, to make sure the location of the ship doesn't fall into Dalek, uhm, plungers.

They spare him when he's mis-identified as "a doctor" as it appears the rebels have a very special patient: a Dalek that wants to see all other Daleks destroyed. Intrigued by the prospect of a 'good' Dalek, the Doctor decides to help. 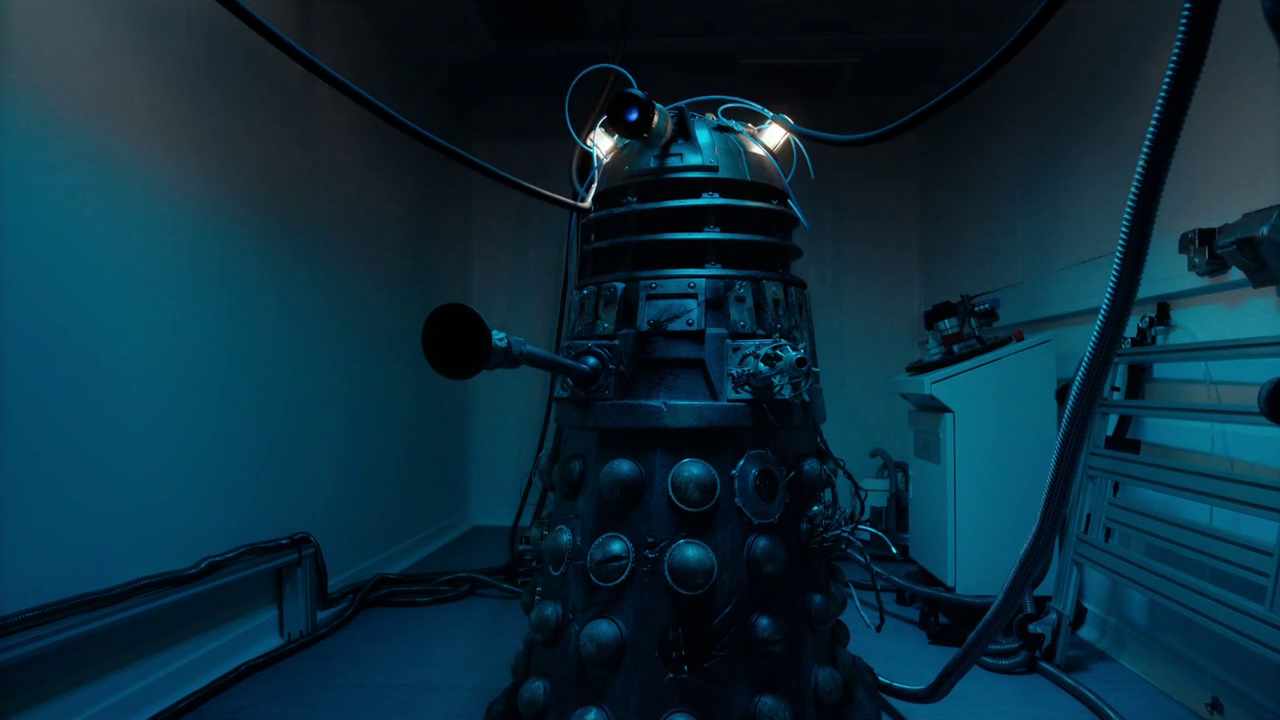 Clara, in the meantime, flirts with her school's new math teach, a former soldier himself (let's assume Iraq for now), for whom the show makes it a point that he has both seen combat and likely taken civilian lives.

For the time being the math teach, Danny Pink, is left alone. There is quite a bit of a deal made in the episode about how the Doctor really dislikes soldiers. I've made it my point not to follow casting news, because my Internet experience has become detrimental to my enjoyment and the shock factor of shows and movies. However, I would assume that sooner or later Mr. Pink will board the TARDIS or, at the very least, meet the Doctor and talk this out.

The episode offers some nifty classic sci-fi ideas and visuals. The Doctor naturally takes Clara with him to help the Dalek and how will they help it? How else, of course, but by becoming miniatures and being rocketed inside the Dalek's body. 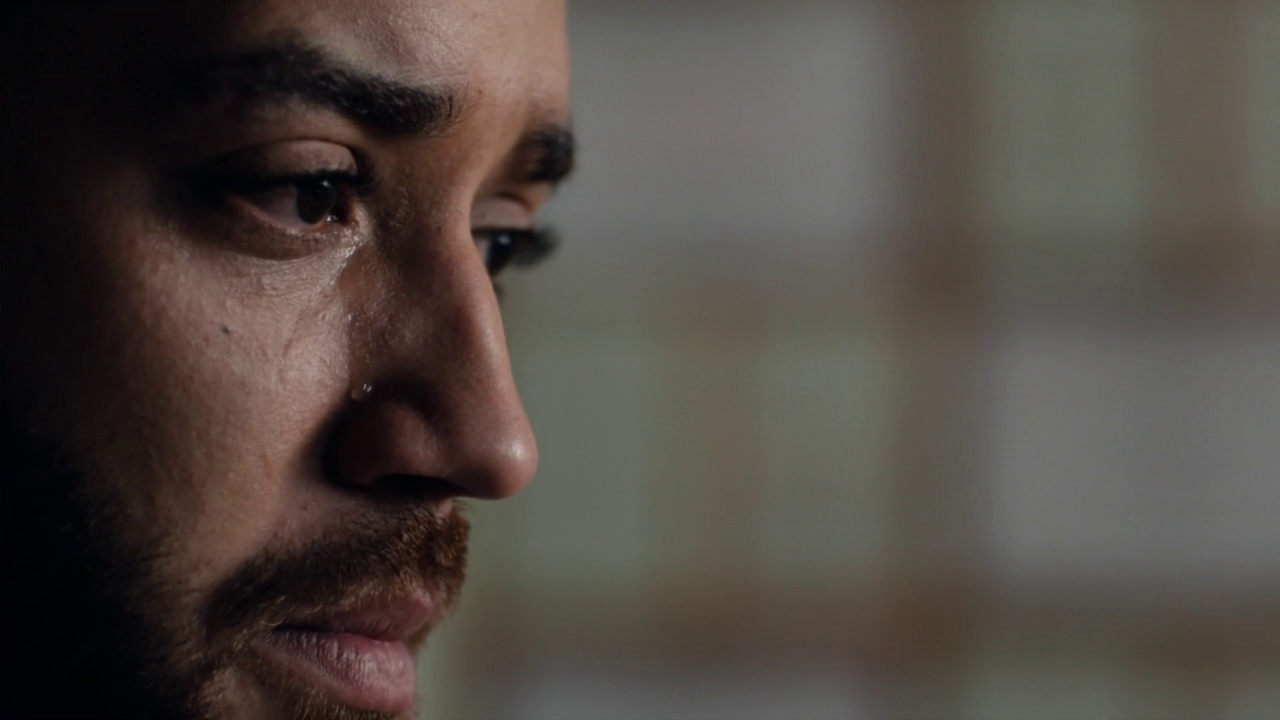 For better or worse there is nothing particularly impressive inside the Dalek. Most of it is machine to begin with, as such the majority of the episode the Doctor, Clara and their guest star supports spend their time in the usual metal corridors commonly found in any ship or factory ever featured on-screen.

Even the Dalek's cortex, that holds memories and becomes a big part of the resolution of the episode, is just panels. That's it.

This is a problem I found with the Series 7 second episode as well, "Dinosaurs on a Spaceship", concepts that sound extremely cool but are extremely underwhelming in execution.

So, visually, the set designers don't get a raise for this one, but director Ben Wheatly does. The talented director once again manages to provide shots that compensates for the script's lack of tension and the banality of the sets.

But let's go back to that story for a moment, because there is actually meat there. For one thing, the Doctor's aversion to soldiers is not one that I personally recall from past Who (Classic or New) and it seems odd to me. He never seemed to have much of a problem with UNIT, for example, no matter how much he antagonized the unforgettable Brigadier. For that matter, he didn't seem to have a huge problem with his daughter, either. 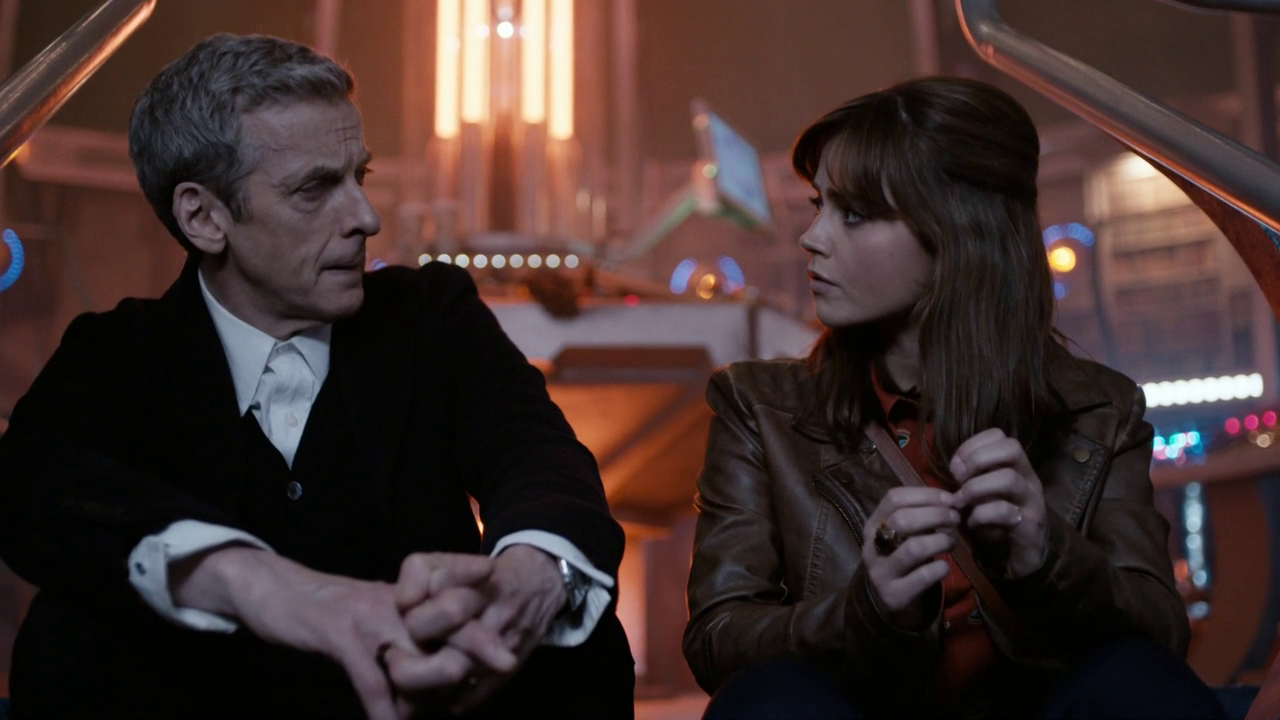 Perhaps this is a left-over from revisiting the Time War in the 50th Anniversary Special? Perhaps and maybe this ties to the Doctor's new mission of becoming a better person and correcting his mistakes, which is also touched upon in this episode. Right now it's just a tad confusing, because changing the fate of Gallifrey in "The Day of the Doctor" should serve as a means to get rid of the guilt he'd been feeling since the relaunch.

More importantly, I mentioned earlier that the drama in the episode resonates. A lot of that is credited to Wheatly for the way he sets up the Dalek invasion of the rebel ship, with shots that are both emotionally heavy, as well as legitimately tense and scary.

But what truly stands out is the twist at the end. Just when I thought "Into the Dalek" was too much like Matt Smith's run, it pulls a plot twist so simple and yet so emotionally heavy I have to admit I needed a few seconds to re-focus myself on the episode.

I'm refering, of course, to the Dalek seeing into the Doctor's mind and finding "hate". Pure, incorruptible hate.

This isn't the first time the show has suggested that the Doctor is too much like a Dalek and in that regard, it's not exactly an impressive revelation. However, between Capaldi's amazing delivery of an expression of regret and terror when "Rusty" (the Dalek patient) comes to this conclusion, as well as the episode's entire set-up regarding what makes a good person, it works.

The Doctor is not someone who generally hates people based on anything. The one and only time he has truly hated something is the Daleks. His sudden aversion to soldiers seems to be fed by the realization that he still harbors too much hate in him. He himself says that the Daleks are (perfect) soldiers. The War Doctor was a soldier in a bloody war that had (likely) lasted close to a thousand years and revisting that face of his that he had suppressed for so long may have brought him to question how good of a person he really is. 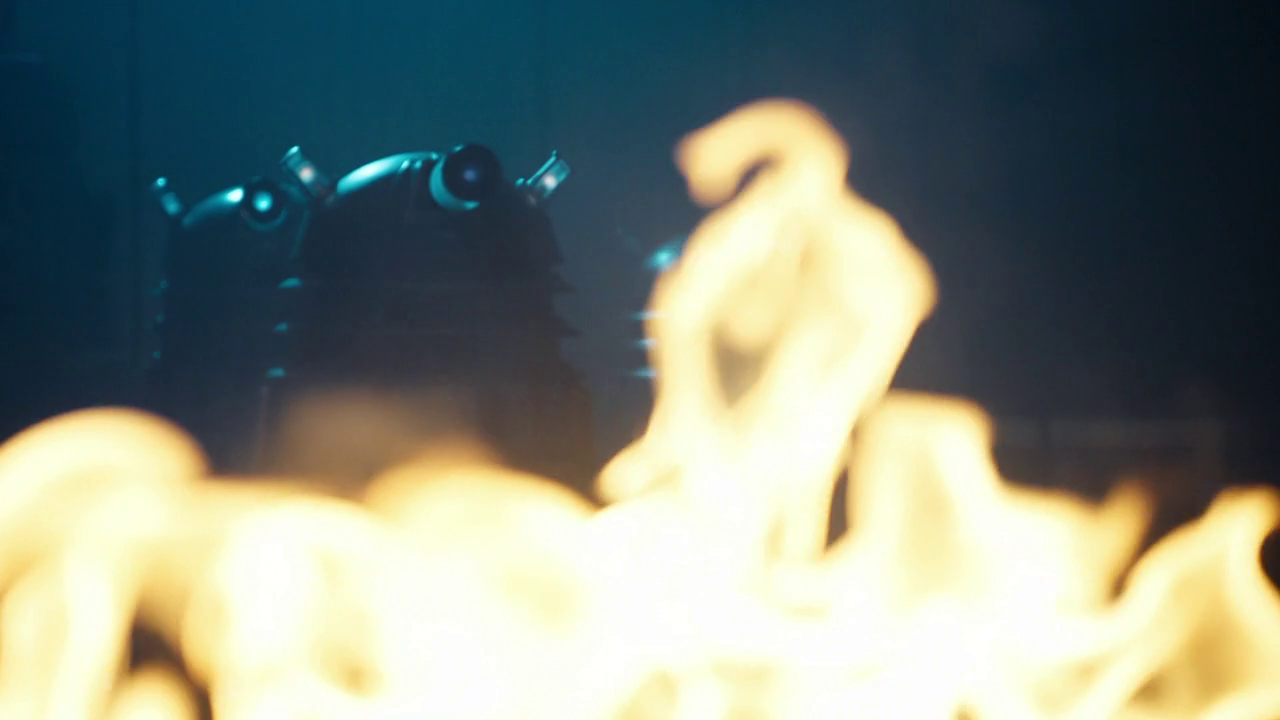 Even now that Galifrey's ultimate fate has been changed, they're still locked away. In "Deep Breath", both the Clockwork Robot and the Doctor were trying to reach their "Promised Land", but for all intends and purposes that land did not exist. The Doctor can't bring Gallifrey back as long as the Daleks still exist, because the Time War would resume and swallow everything. Finding Rusty probably made him believe that if the Daleks can be changed; "if I can turn one of them, I can turn them all, I can save the future", he admits. If the Daleks can be given to understand that they don't need to operate on pure hatred, he would be able to restore his home without any more warring and bloodshed.

Only Rusty wasn't devoid of hatred. Even after the Doctor "healed" its mind, the Dalek turned against its own. Its prime-directive had remained the same: Exterminate. All that had changed was the target.

To cap this off was Rusty's final line to the Doctor: "I am not a good Dalek. YOU are a good Dalek!"

In that regard, the Doctor no longer feels burdened by the loss of his people. He's not the last of the Timelords, nor the war survivor. He's just hopeless. Perhaps that's what the "darker" direction that was touted prior to the show's premiere will revolve around.

When all's said and done "Into the Dalek" is definitely an enjoyable episode. There are some continuity questions raised in regards to the Daleks' knowledge of the Doctor (or lack thereof), while the Doctor's outright hostility toward soldiers is fairly forced, especially considering that the rebel soldiers likely aren't soldiers by trade but by necessity (being rebels and all). 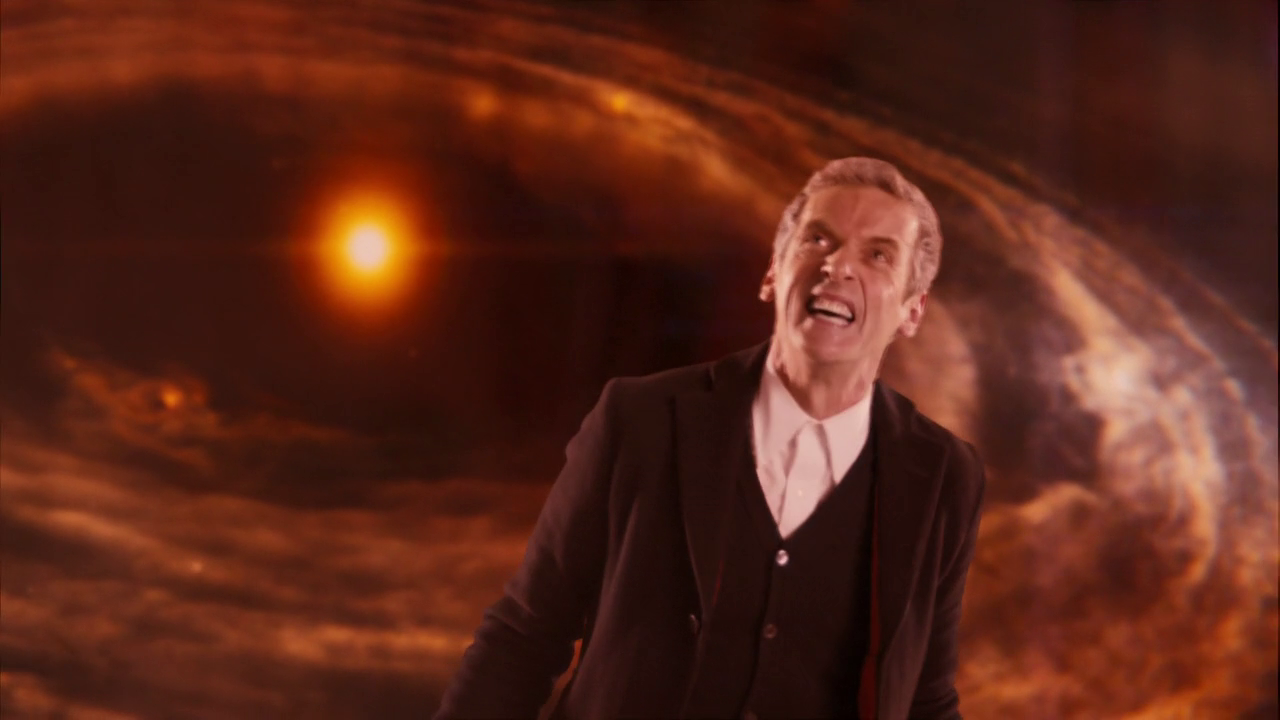 Despite the complaining I did at the start of this piece, the truth is that upon careful inspection, it is not a Matt Smith episode. Scenes like the Doctor tricking a man who's about to die with a straight face, or landing into a pool of liquified human bodies and joking about it stand out. It's not just the (implied) gore, like the organ harvesting in the previous episode, it's the way the Doctor carries himself through it.

"Into the Dalek" is flawed, but it's well-shot, well-written and superbly-acted. It's an episode that contrasts a classic, "silly" science fiction plot (becoming miniaturized and entering someone's body) with raw death, gore and a protagonist that becomes so cynical, he's hard to like sometimes. So far, Series 8 is very, very promising. 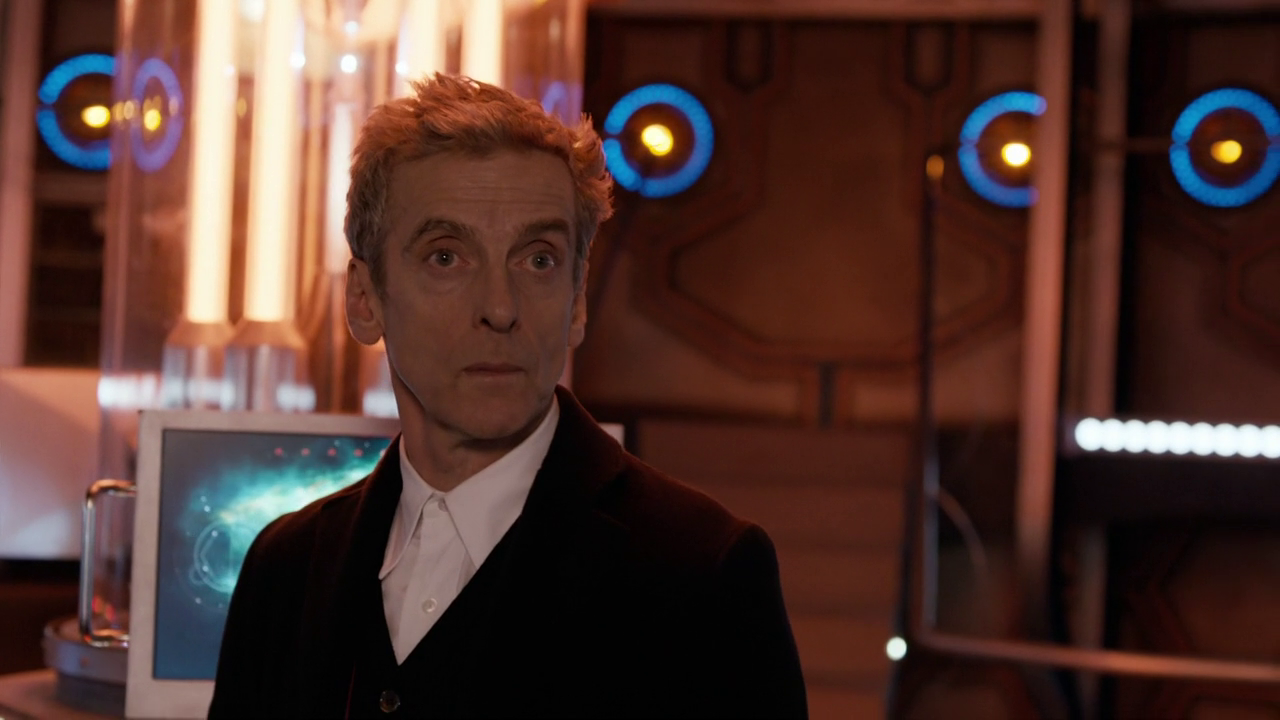