The other day, I caught a bit of "King David", starring Richard Geere, on TV. See, it's Easter over here so a lot of those time epics come on during this time. 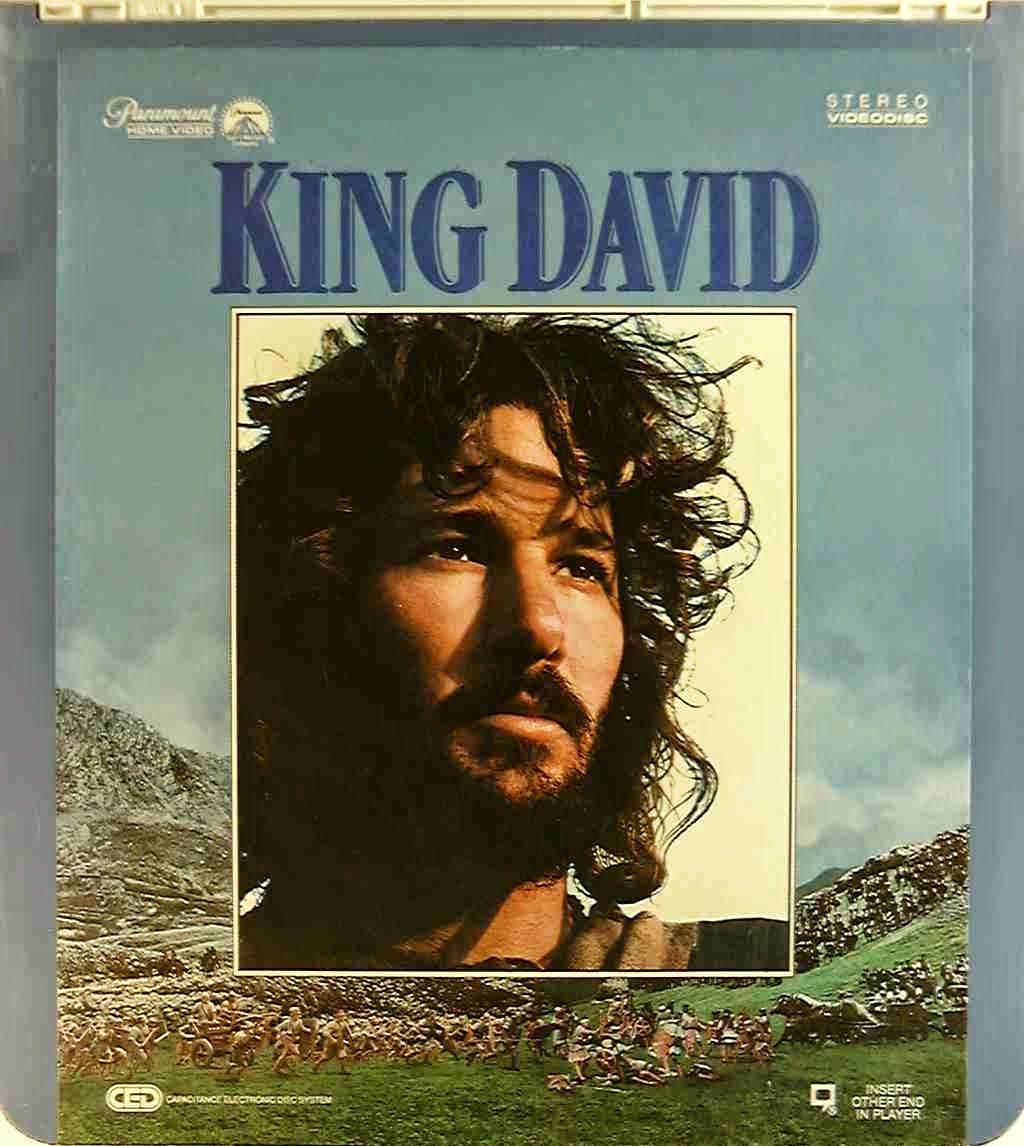 As an atheist, I'm not big on many of them, even though I've watched a great deal of those throughout my life. But just because of my philosophical views, I don't instantly despite them; some are actually very good. Franco Zeffirelli's (of Romeo & Juliet fame) "Jesus of Nazareth" takes the de facto position that Jesus was God, but it's a very well-crafted mini-series, extremely well-acted with great sets, dialogue and pacing and fantastic direction. I believe everyone should see it at least once.

As such, I want to point out that the following is in no way a review of "King David". I actually found it fairly enjoyable. I'm also not going to hold it against the movie that it takes the position of the Judeo-Christian God as the only true god, because it's not a historical documentary; judging a movie based on Hebrew mythology for embracing that mythology would be like coming down on Game of Thrones for featuring dragons and non-existent kingdoms.

I'm not an unreasonable man, you see. I am, however, a man scared shitless by the stuff people believe in at times.

For the most part, I'm the kind of person that believes in "live and let live". This extends to my atheistic views as well-- it better, really, as almost everyone I know is a Christian (even though most people don't follow or even know the Bible, they just hold a deep belief in the Judeo-Christian deity). But there are moments, ever so subtle moments, that I just have to raise an eyebrow and call out on some of the bullshit.

As I said, I hold no malice toward the actual movie, because it never claims to be based on real events or historic accounts. At the same time, though, I know that people of faith who watch it, believe in the events that transpire in it; they are mostly taken from the Bible, after all.

"King David" is, obviously, based on books from the Old Testament and chronicles the journey of the famed Hebrew king and (for most of the movie) his struggle against the old King, Saul. Again, believers consider these to be historical facts, down to the mystical aspects (which the film is fairly subtle about, actually).

Well, here's the thing; the movie starts with a Hebrew High Priest beheading an unarmed, tied prisoner, because God willed it! All the while he berates Saul for not doing it and as such sinning, because the evil first king of Isreal had the good sense to want to negotiate with the prisoner's people and ask for ransom.

This is passed off (in the story and the movie) as the just course of action.

Then Samuel, the high priest, goes to a man holding two stones, which will reveal to him the next God-anointed King of Israel. Let me repeat that; he walks there and two magic stones reveal the King. There is nothing about that scene that wouldn't have fit in Lord of the Rings, Game of Thrones, Dungeons & Dragons or any other fantasy world, mythological or not.

The rest of the film cuts back on the mystical BS (though God is a constant factor) and progresses as one would expect, showing the rise, fall and eventual redemption of David. None of it is badly done, but there are small things that still raise questions in my mind:

Why does the highest praise for David include killing "tens of thousands"? I know these were troubled times that relied on warring, but it kind of goes against the whole "ever loving God" thing. Also, "Thou Shall Not Pick And Choose Who You Are Allowed To Viciously Murder" or whatever that

Actually, why does God demand that all heathens are put to death down to (and I quote Samuel on this) the last baby feeding off the tit of his/her mother?

On that note, why does David exclaim that Moses' law is outdated and his law will face everyone (Hebrew or heathen) equally? Can he just do that? Aren't those laws handed down by God? And if Kings, who are hand-picked by Him, have the authority to change these laws and rules of conduct in His name, why was Saul berated as a sinner when he was trying to negotiate the return of heathen royalty to his people?

Why do all politics in Israel rely on God as the highest order? Why do we get a million of these epics and so few stories revolved around infinitely more interesting politics of other ancient civilizations like Greeks or Romans or even the Brits (without them being depicted as asshole oppressors)? They too were devout in their gods, it was a given at the time (Agamemnon did sacrifice his own daughter to boot the Trojan War), but at least the reasoning behind their decisions went beyond "because god willed it".

Similarly, what kind of reaction would a movie about the politics of an Islamic theocracy would face and why should it be any different?

Why is the antagonist and supposedly evil/misled King Saul not only the far more interesting character than David, but also the only sensible person in the story, even despite his brief outburst of fear and jealousy that David might usurp his throne? Why is he viewed as the bad guy, when he's trying to negotiate better terms and money for his people, opposite to a totalitarian philosophy that demands all non-believers are slaughtered?

Why is it okay for David to be polygamous and veer off his intended path, down to manipulating and demanding women marry him, but gay people should be stoned for simply existing (let alone demand they have marriage rights)?

Finally, just to fuck with some religious skulls, why is David's victory over Goliath such a big deal outside the subtext of the meek overpowering the strong? Based on the fight as choreographed in this movie, Goliath, well, sucked!

For one thing -and I remember this being in line with the original story as well- the dude drops, because David had a lucky shot. The stone from David's slingshot hit him square in the forehead (in the glabella region of the skull) killing him instantly. Either David aimed there for no reason or he got a lucky shot in a stupidly unprotected area of the head.

"Oh but that was the grace of God..." No. It was a lucky shot. With a slingshot.

To make matters worse, the way the fight was choreographed, Goliath was a big guy, covered in armour and wielding a shield. He actually uses the shield to deflect David's early attacks, but then he just drops it for no good reason. Yup, he throws a spear at David, which misses and then willingly tosses a perfectly good shield aside and takes a sword out.

He then proceeds to swing that sword like an idiot, while slowly walking toward David, giving the latter ample time to take a seat, eat some seeds, do his nails, lose his virginity, graduate with a PhD in Astrophysics, oh and perhaps throw a rock straight into Goliath's goddamned skull!

If that dude was the Philistines' champion, I'd hate to see their worst warriors. They'd probably crawl into the fetal position in the middle of the battle and munch on their own faeces.

In fairness to some historical accuracy, the actual shot probably never landed on Goliath's forehead. Archaeological data suggests that, much like most ancient warring civilizations, the Philistines also had the good sense to armour the glabella and the nasal bone with their helmets and scholars assume that, based on the description in the Bible, David probably critically injured Goliath's knee, causing him to collapse forwards onto the ground, which then allowed David to chop his head off. Of course, how historically accurate this is remains an uncertainty.

But none of that matters, because the film adapted what was in the Bible. And people who read the Bible and watch such movies without further research, blindly and unquestionably believe in the events that transpire as historical facts.

Now, what was the point of this entirely unresearched and wholly reactionary piece, you may ask. None, really, a lot of it was just petty frustration that year after year I have to deal with this shit; two weeks of the same movies, some not even directly connected to the Jesus myth (or whatever you like to call it), as well as other ridiculous traditions.

The same can be said about Christmas, but Christmas is actually fun; it's derived from a Pagan holiday (the Winter Solstice), it has cheery songs and decorated trees and flickering lights and colours and presents. Also, movies that make you all warm and fuzzy inside.

Easter? Not so much.

But mostly, every now and then and despite my own philosophy in life, because people need to be called out on their bullshit. Because this movie starts with Samuel taking a head while promoting the slaughtering of every non-believer's man, woman and infant child. And because this movie aired at 10:30am, during holidays, when school's out and the only things children could do was either watch it, or be dragged to church to see the wooden replica of a battered man nailed to a cross.

But at least it's nothing as terribly and dangerously violent as Power Rangers. Right?

Email ThisBlogThis!Share to TwitterShare to FacebookShare to Pinterest
Ετικέτες Cinema