You have to give it to DC: they'll do everything in their power to promote their publicity stunts. Superman has undergone many changes in the last decade and one of them is to make him more desirable to the (potential) female readership.


This includes doing away with the big, muscle-bound alpha-male of yesteryear and drawing him leaner, more defined than muscled, with a "swimmer's body" (as Marv Wolfman described him in the novelization of "Superman Returns"). The New 52 also brought him youth (he's in his early 20s now), a good measure of angst and a new relationship with the hottest and most-well-known of all female super-heroes. 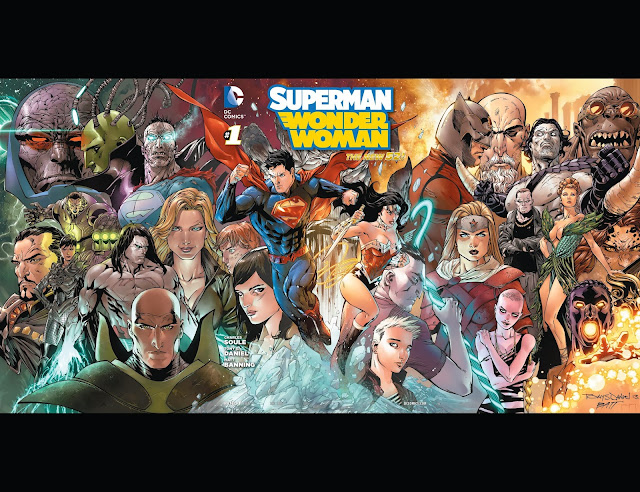 Yes, Wonder Woman and Superman have been an item in the on-going books for a while now and it was a big deal: fans and writers have been unoficially pairing the two characters for a very long time and now it's the first time DC actually does it.

And it is a publicity stunt.

This romance came out of nowhere with literally zero built-up and it's had practically no visible effect in the DCU. Hell, it barely had any focus outside of being vaguely referenced (at least in Superman books; I don't read Wonder Woman).

So now, to further back that stunt and squeeze it to its last marketable and profitable drop, they put out a Superman/Wonder Woman book. World's Finest? World's Hottest.

I had every reason to dislike this. I never got used to Superman and Wonder Woman together as a couple, even in the old days when it was done in jest and I still don't seem to care that they are together in the books. It didn't help that recently the writer of the book, Charles Soule, came out with comments about them trying to approach female readers with a romantic approach and particularly the Twilight audience.

I imagine none of them has ever read Twilight, because otherwise they'd know this is the worst-promotion possible.

Fortunately, having read the introductory issue, it seems I'm correct. It really wasn't bad at all.

It starts with Superman and Wonder Woman over the ocean, taking care of a storm about to explode. The story cuts back and forth, setting up Clark and Diana in and out of their relationship and then returning to the events regarding the storm.

There isn't much to say about the story. Clark meets up with Cat Grant (with who he has joined forces and writes for a shared blog, since he quit the Daily Planet a few issues back). They talk about practically nothing.

Diana is training with... someone (again, I'm very sorry, I don't read Wonder Woman). Her dialogue has a tad more essence, as during sparring she quickly recounts the aftermath of her origin (apparently most other Amazons have been transformed and imprisoned) and discusses how she wishes Superman wouldn't be so adamant about hiding their relationship.

The couple eventually meet up and briefly talk about the matter, Clark insisting that it would be too public and that he essentially likes having this for himself and away from the public. Interesting moments include Diana offering to teach Superman how to fight and some shady figure having snapped a picture of the two kissing earlier in their careers, which they then promptly mail to Cat Grant (who is desperate for a big story). See? It's a super-hero soap.

Back over the ocean, the storm seems to be the least of the two heroes' problem, as out of nowhere something hits Superman off-balance and launches him away. Wonder Woman believes this to be a military vessel that crosses, but it turns out it's something much worse: Doomsday, the Kryptonian abomination that once killed Superman, is back (and I am happy to report that hideous design released earlier this year is nowhere to be seen). 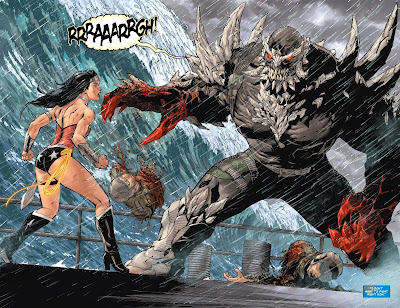 Honestly, none of it is a bad read. The dialogue is alright, the characters are faithful and the art is great. The problem is that "not bad" is the best thing I can say about it.

The way the story is plotted for this pilot issue, it may be trying a little too hard to get that romance-loving part of the female readership. The action is sporadic, which is okay, but the quiet moments come in the form of any run-of-the-mill romantic dramedy, awkwardly setting up the characters and the framework of the relationship before putting them together.

The reason I feel this is a bad way to go about is simple: it doesn't sell the relationship. To anyone. Except maybe those 13-year-old Twilight readers (who I'm fairly positive are around 19 by now).

If DC wants a new influx of readers, young women, with interest in that sort of supernatural (or super-human at least) romance, they do absolutely nothing to frame this relationship. It already exists, it's there and despite efforts to re-establish it though the Clark & Diana scenes, it feels like something is missing. They get the tone right, the kind of sexy, clean, slow-building vibe, dark and engaging without actually anything happening, but not only is this shit story-telling (particularly in the long-term), it's also not as attention-grabbing as they may think it is.

Comic book readers are used to almost all 24-page-long issues being a teaser of sorts instead of a full story (I miss the Bronze Age), but new readers will be left lost. Being curious about more, but not necessarily wanting it enough to pick it up again in a month.

Then, there is me and everyone like me. I like a good romance, really and I learned that with none other than Superman himself back in the '90s, when DC was pulling that same shit with long-time love interest Lois Lane. But I have yet to buy Superman and Wonder Woman as one.

It's funny, but they just don't have any chemistry. None. It's Superman's fault; he's largely undefined in the New 52 still, DC trying to sell him as more troubled without actually having troubles and a bit of a hipster (he's only slightly less pretentious than Garfield's Peter Parker in "The Amazing Spider-Man"). The guy rarely even smiles anymore and when he does it's not the big, inviting smile; it's the troubled-underneath-the-surface, smoldering-sexy smile. 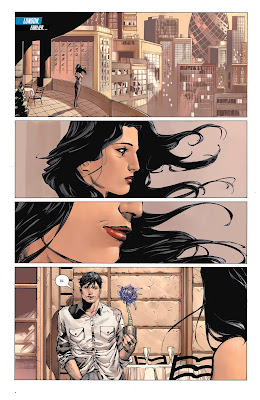 Even reading through this book, I got a handle on Wonder Woman, but Superman comes off as such a... model. Typical media stud, dude for a cologne commercial. It's excarcebated in this book, because in the regular series he at least interacts with BFF and fellow geek Jimmy Olsen, while he has a lot more chemistry with Cat than either Wondy or even Lois.

The best parts of this pilot issue are when the both are in costume. They just interact better then.

There is potential, I'm just very suspicious of DC's constant publicity stunts lately. Perhaps this is just not the book for me. It's a fair point, especially if the focus of this one will get an even bigger "tweenies" romance flavour in the future and who am I to demand that everything is made for me as an audience?

I'm just curious, because there is obviously no story to be told in Superman/Wonder Woman. We can only hope someone will find one in time.
Αναρτήθηκε από GamelyPlanet στις 2:25 AM