My life is so exciting. Let's get down to it. What happened over the last week???

Everybody's still bitching about the ending to "Mass Effect 3". And that's it. Nothing else of significance anywhere in the gaming world. You know, if you'll take up two-weeks-minimum to moan endlessly about the ending of a game, you may need to go over you priorities once more. I mean, it's customary for fans; we're still bitching about the ending to Metal Gear Solid 4 over at the MGS-related forums. But when the entire fucking gaming press is spending anything more than a day on this, ironically, we may need to get a hobby. 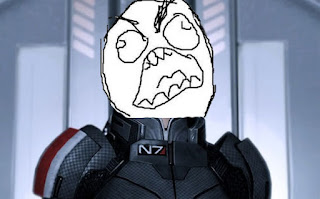 Yes, I know, Bioware said they're seriously considering changing the ending to the game via patch release. Some revolted against the idea, some idiots over at otherwise significant "publications" said it's a fine idea, because it defines the interactive nature of games as a medium.

I don't know at which point creators, in any medium, being coerced by the audience to change their work became a good thing. You receive feedback to improve on in the future, not to go back with an eraser and MS-Paint the living shit out of YOUR creative work.

I genuinely believe that if Bioware actually does back down and changes the ending, they need to fucking quit this business. They'll be part of the problem, that problem that gives entitled little dipshits the right to take over the gaming press' comments section for two cocking weeks over what's just a disappointing ending to a goddamn overpriced toy.

Perspective, people. Games can be great, but not as long as we choke their potential to fit our every whim.

(Update 3/3/2016: I don't necessarily adhere by the above statements, at least insofar as paying customers can't realistically be called "entitled")

But, if there is one good thing that came out of this circus on Joker gas is Leigh Alexander's excellent article over at Gamasutra about how Bioware may had made promises with Mass Effect 3 it couldn't realistically keep. It's great, insightful and pertains to the entire industry. Read it here.

(Update 3/3/2016: There was a time when Leigh Alexander didn't entirely suck. Deal with it)


A new Baldur's Gate has, for some reason, been more-or-less confirmed. Also, the recently announced REDUX version's getting an iPad release. Because nothing is better-suited to a tablet than a days-long point-and-click RPGs from the late '90s.


If you've been around in movie and comic news last week, you may have heard that Michael Bay, the hack who assassinated the Transformers live-action movies, is acting as a producer in the upcoming Teenage Mutant Ninja Turtles film(s). While he's not directing them, he already reared his ugly head and pitched the Turtles be aliens. I like the Turtles, but I never cared all that much to actually be upset over this (as I was about Transformers). But it does remind me that the man is incompetent in his chosen profession. He doesn't have the mind for creative ideas, he doesn't have an eye for action or storytelling, he only has a knack for pose-shots and stunts; things that are perfect for music videos, or trailers or just still posters, but not actual films. So, nothing new there.


The best thing I read last week was a great editorial suggested to me by my friend Erik , about the vilification of the used games market. It's a couple of years old, but it's still very much relevant in the industry, because there is one, significant thing that remains; fight over distribution control. It's the thing that fucks up the prices of pretty much everything out there and there have been horror stories, especially when the distributor has the monopoly. People who have been reading comic books know this best, as Diamond was the only distribution company and they got to bully the living shit out of retailers that needed to sustain their stores.

On the other hand, even if you cut out the middle man, you get things like 70 bucks for a new game in PSN and XBLive, even though the actual retail price (with the retailer's cut thrown in) is *at least* ten bucks below that.

It's a great read that remains relevant and important. Have a crack at it.