Oh, Warner Brothers! I remember when you first announced your line of Direct-to-DVD animated features about DC's super-heroes and what a good idea that was. It would be a chance to see new material from a production team led by animation legend Bruce Timm, which would be awesome.

More importantly, it would be a platform to adapt to and make known to the mainstream some of the most important and celebrated story arcs in comics. It's how you've used most of those short films and I'm thankful for that.

Well, maybe you should stop now! 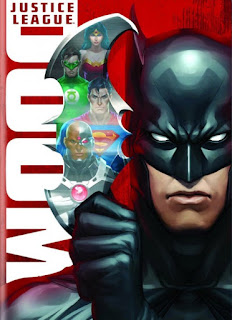 Here's the thing with the recent "Justice League: Doom"; it's boring. It's not awful and the action is colourful and exciting enough for the younger viewers, but it feels interchangeable with the other Justice League films in this series-- with the notable exception of "New Frontier".

Even the title is uninspired. DOOM!

"Doom" is a surprisingly loose adaptation of Mark Waid's "Tower of Babel" 4-issue-story arc in the "Justice League of America" comic book in 2000. Once again proving that not everything in comics is suited for film, the story was changed notably for this outing, which was written by the late Dwayne McDuffie, who left us in February 2011. In fact, this animated movie is dedicated to him!

Now you're just being passive-aggressive, film! I can't argue with you when you throw a dead writer at me! Especially not when I really, really liked his previous adaptation ("All-Star Superman", January 2011- the adaptation was as close to perfect as possible considering the subject material).

Alright, before the pitchforks come out, the writing in and on itself isn't bad, it's just that "Tower of Babel" is apparently a lot less adaptable to a pseudo-PG-13 animated film than one would think.

See, the original story is a comic book story through-and-through. Batshit-insane logic, continuity, character development (or assassination, depending on who you ask) based on the reader's knowledge of the comic book's history. That shit's hard to fly in an one-off featurette.


The original story goes somewhat like this: Ra's Al Ghul, one of Batman's strongest adversaries, decides that mankind could use a little thinning out before we destroy the planet. Being a lot less passive aggressive than Al Gore, he puts a rather intricate plan in place.

He beams a signal that incapacitates the human brain's ability to recognise and process written and spoken word, rendering humankind unable to communicate. Inevitably, this would lead to global chaos and likely a big body count to accompany it (like the biblical Tower of Babel. What shines is his plan to eliminate the Justice League; a set of carefully-targeted attacks against each and every member of the League specifically. Most of them are particularly imaginative. The twist comes when Batman rushes to the rescue of his fellow Leaguers, recognising the plans as his own; fail-safes, in case any JL member ever went rogue.

Overall, the four-issue-arc is some of the strongest the JL book had and for good reason; Ra's' plot is just a framing device, but the meat of the story comes in how well Batman knows his team-mates and how he still just doesn't trust them enough. This is nicely juxtaposed with Talia, Ra's daughter, a woman always loyal to her father, whose only one other weakness are her feelings for her "beloved" (Batman). In a rare fit of disobedience, after she performs her father's dirty-work against the League members with her own League of Assassins, she turns on him, tips the JL off and then abandons her heritage.

Another great thing about the book is the subtle (or sometimes screaming) cruelty of Batman's fail-safes against his friends. Almost each one of them is imaginative enough, playing on the heroes' strengths, instead of their weakness, turning their own power against them. The whole thing is laced with delicious irony and a sense of resentment from the one mortal of the team against his superhuman team-mates. It's what you'd expect a sick fuck like Batman to do.

That's why the story became a classic. Sadly, most of the above is -understandably- impossible to adapt to a fast-paced animated film. Ra's' motivation won't make sense unless you already know Ra's and there is little action you can fit in when you throw the League of Assassins (a group of well-trained men and women) against the freakin' Justice League.

So, Ra's is replaced with Vandal Savage, an immortal megalomaniac who only seeks to take over the world and rule with an iron fist. He puts his plan in motion, to detonate a pretty big nuke on the sun and create a solar flare powerful enough to roast the unfortunate half of Earth's hemisphere that happens to face our solar system's yellow star at the time of impact. Instead of foot-soldiers, he forms the infamous Legion of Doom by recruiting a villain from each Leaguer's rogue gallery.


If you know enough about super-heroes, all the above seem like logical changes. But they end up destroying any impact the original story had. Savage isn't nearly as interesting a villain as Ra's in this context. The elaborate scheme becomes painfully simplistic and generic and the resolution is the same bullshit "teamwork"-super-powered-extrrrrravaganza that every single super-hero story falls back on to cue the end titles as quickly as possible.

Savage still uses Batman's own fail-safes, but they aren't as interesting and often-times exploit the heroes' weaknesses, like any standard villain would. Without going into much detail, Superman's incapacitated in the original story by a synthetic red Kryptonite that turns his skin translucent, making his yellow sunlight absorption drive him mad with excruciating burning pain and lose control of his powers. In "Doom", he gets shot with a Kryptonite bullet by Metallo. Haven't seen that before!


Another issue, of lesser importance, is that some of the Leaguers were replaced. The original story, having been written in 2000, featured Superman, Batman, Wonder Woman, the Martian Manhunter, Kyle Rayner as the Green Lantern, Wally West as the Flash, Aquaman and Plastic Man.

In "Doom" Plastic Man is kicked out, Kyle gets replaced by Hal, Wally gets thrown out in favor of Barry and Aquaman is nowhere to be seen, with the Teen Titans' Cyborg taking his place. Presumably this was done to accommodate DC's "New 52" Justice League (which consists of the same core members). Unfortunately, most of the original story was suited to these members in particular and changing them only burdened the producers' work.

Though, to be fair, this is probably where McDuffie did his best work-- as far as this movie goes. Cyborg is left out as a wild card, not being a formal member of the League at the time of the attack (whereas Aquaman was poisoned to fear the water he needs to survive and Plastic Man was frozen and smashed into pieces-- I shit you not). Barry and Wally are interchangeable in powers and thus the transition was easy, but Kyle and Hal are fundamentally different. Kyle was an artist; Batman's fail-safe made him blind, unable to use his eyes to shape his will as he wished through his Lantern ring. In "Doom" McDuffie utilises Hal's new-found arrogance in his powers and he is forced to face his failure; a reminder of the way he lost Carol (Ferris, long-time Hal Jordan love interest), when she became Star Sapphire: the villain Savage recruits to throw against him.

That's the best transition McDuffie did from the original story, but even that can't really stand on its own, because of the lack of backstory.  The context is given a mere two lines, due to time constraints and even if you know who these people are already (as I do), you may find yourself wondering what just happened.

Honestly, that's what's wrong with "Doom". It's the same problem "Crisis on Two Earths" had. It adapted a story that shouldn't be adapted in a platform that can't support it in is current form. To say this was adapted from "Tower of Babel" is generous, as it feels like a completely different story that just borrows some elements from that arc. But at the same time, they *were* trying to adapt that story and in all this effort, they ended up with the same generic Justice League story you'd expect from the biggest filler book on the shelf. Considering that a lot of this production team was involved in the original Justice League/Unlimited TV show, some of the finest cartoon to ever grace television, it wouldn't be uncalled for to say they were totally phoning this one in.

I really like most of this line of short films, but maybe it's time for a new direction, because even looking at the titles up on Wikipedia, one can notice a very soulless-mass-production-machine approach that's a disservice to the extremely competent creators more than they are to the audience. Pick your stories more carefully, guys and, better yet, make something original. I know you can do either or both.

PS: "For the Man Who Has Everything" (JLU) is still the best comic-to-animated adaptation I have seen.
Αναρτήθηκε από GamelyPlanet στις 3:49 AM