Come into MY Web!

Remember the Fear? I love how I can take one line from his introductory scene in MGS3 and apply it to the current Internet "war" so easily. " I will give you fear, such as you've never experienced before", he says and concludes "come into my web!"

What did happen over the weekend? Oh, the usual. Anonymous keeps taking down sites (CBS.com was the last I heard about) and everybody at the US Government are being dickheads, unable to even keep up pretences that they aren't the scum of the Earth. You know, I was wondering how long it'd take for the United States to paint a giant bullseye on themselves again since they pulled out of Iraq. A pity, I had started enjoying the quiet and (mutual?) respect.

Look, I don't have much to report, I just want to recount a few things that befell my attention (if you're following my Twitter, you probably already heard about them).

Some bright lad over at the MPAA subtly admitted to bribing senators over passing SOPA.That lad was MPAA's CEO and he fucked up during an interview over at Fox News. You can read about the piece here.

Genius. Elected officials trump public consensus in a Democracy. Which is the exact opposite of what the fucking word means, but whatever.

By the way, be VERY WEARY of this "American jobs vs foreign criminals" bullshit that's been flying all over the press in the last month. I'm talking to you, Americans. It's a documented technique to de-humanize the "enemy" and alienate you toward them (also see: PIIGS in the Eurozone crisis).

Do these people really want a "US vs THE ENTIRE FUCKING WORLD" conflict? 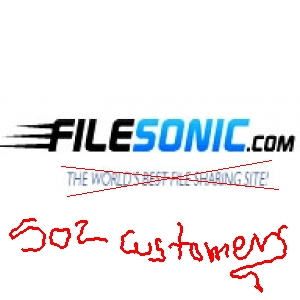 The question, of course, is what do they need SOPA and PIPA and all these other bills for, when they can already do whatever the fuck they want and control the entire entertainment industry. If the display of power on Friday with Megaupload wasn't enough, I found out yesterday that file-sharing service FileSonic shut down their sharing services and instead only offers storing and retrieving your own files. Leaving aside the fact that this was done without any warnings or notifications (which is unprofessional, to say the least) and that the current FileSonic service is about as useful as storing your car-keys in a PO box, we see the first of many to cower in fear as the Assholes Extraordinaire march around the Internet with their giant cocks in their hands like it's their own fucking bedroom.

The irony in all this? I very highly doubt FileSonic will be able to survive for long without huge staff and service cuts in its new form. Not in the world of cheap file transfer devices and remote desktops/computing. One business down! Several to go!

For fuck's sakes, they didn't even need to send a C&D. They made an example out of Megaupload. Isn't that a torture/coercion technique in war-time? What the fuck is wrong with you people?

With less fanfare, just a couple of hours ago, I found out in Twitter that the U.S. Congress considers re-copyrighting works that currently belong to the public domain. I don't even need to comment on that. You can read about it here.

It's always about control. It's the safest form of absolute power.
Αναρτήθηκε από GamelyPlanet στις 4:35 AM