The DCUO 'review' is in the works, but it'll take a while to complete as it's pretty big. So, in the meantime, I want to say a few words about Andrew Lloyd Webber's "Love Never Dies", the much publicised sequel to his "Phantom of the Opera" inescapable stage-show.

I obviously couldn't see the show; not even the original has ever come here. But I did some research about the backstory and saw reactions etc. and I finished listening to the soundtrack just a few minutes ago. The good thing about soundtracks of musicals is that the lyrics are essentially the script, i.e. story and dialogue and especially in Webber's case, as 95% of his any play is sung.

Those who know me know my love for the Phantom of the Opera, but I wouldn't really call myself a 'fan'. I've used the ridiculous 'phan' term before, in the same way I've used 'gamer' or 'nerd', in that they're efficient in terms of immediacy, but no, a fan I'm not really. I do love the play and I do love the book for reasons of my own, though. Still, I can't get mad at the insipid "Love Never Dies", because I can't see any sense of actual continuity between the two. They're two stage-shows I can very much seperate-- they're not like films, where making a sequel about immortals from the planet Zeist is pretty much raping everything the original film did.

I'm not even a Webber fan; I find the majority of his work to be ear-bleeding, with the exception of a few songs from "Evita" that I find somewhat tolerable. But for some reason, I just really love that "Phantom" of his. 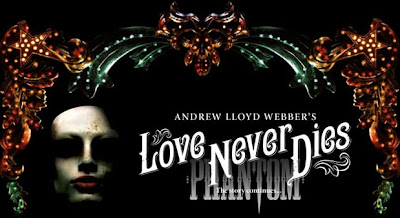 Having said that, "Love Never Dies" is awful-- at least in the storytelling department and both in terms of material and execution. Apparently, most of the story is based on a book called "The Phantom of Manhattan", which too is a sequel. I haven't read it nor do I intend to; it doesn't really matter either. The basic plot of "Love Never Dies" is this: the Phantom escaped his prosecutors from the original and instead of dying, like any reasonably devastated man with no purpose would do, instead moves to America with Madame Giry and Meg. After a few years, he relocates to Coney Island, where he establishes his own entertainment center, complete with jaunty songs and circus freaks. I think. I'm not clear on that last part, as you can't really tell from the songs; it's only what I've found online.

Meg is now his star-performer, who with her mother try a little too hard to be appreciated by him. The Phantom ignores them, still in love with Christine and eventually invites her to perform in his show once more, under his new alias "Mr. Y". Christine, a jealous, gambling Raoul and their son, Gustav, arrive in Coney Island and soon everyone's reunited. Spoiler alerts if you're crazy enough to want to go and see the show for yourselves, but the rest of the story is that on the night before she got married to Raoul, Christine found the Phantom and kindly spread her legs wide open for him. Presumably this is a cop-out of an interpration from the aforementioned book and that's saying a lot, considering the book states that the Phantom had raped Christine. In any case, after she presumably deflowered the poor Phantom, he fell undeserving of her and left her.

See how I don't even need to comment on the plot points? The stupidity leaks from its pores.

The Phantom's virgin load impragnates the surprisingly-eager Christine, meaning Gustav is the Phantom's son and not Raoul's. Of course, after the masks have dropped (har har), the Phantom gets wind of that. Raoul, embracing his new-found-gambling problem makes a wager with the Phantom. If Christine sings in the performance he'll leave her and the child and if she doesn't, the Phantom will pay their debts and stay away from them. In the meantime, Madame Giry bitches about the Phantom not paying attention to her and her daughter, who gets increasingly envious of Christine. Long story-short, Christine sings, Raoul leaves (what a guy), Meg flips, abducts the boy and at the climax of the story, kills Christine. Before dying, she tells the boy who his real father is and everyone lives happily ever after. Except Christine, I guess. And Meg, who is surely going to jail. And Madame Giry, whose life is officially ruined. And Gustav, who's left with a sociopath for a father.

But everyone else is fine! Oh, fuck, it's the early 1900s. Prohibition, mafia and a few decades later, the Depression. WHAT'S WRONG WITH THE WORLD?

Seriously, though, the story (from what I managed to understand from the soundtrack) is just awful. The plot is bad in and on itself; it's unecessarilly dark and it's actually kind of boring, too. It has all the ingredients of a soap-opera, minus the hilarity. But it's second to the attrocious characters. The story assumes you already know them all and makes no attempt to reintroduce them and forge new connections between them and the audience. On the flip-side, they all act so differently than they did in the original, that even if you know them all and love them, you can't help but feel enstranged. There is this argument that lots change in ten years, but this only holds water if the progression is organic within the story as well. In "Love Never Dies" the characters neither grow nor develop. All they do is respond to contrived plot points, usually in the stupidest way possible. Say what you want about the original, but shit happened there and characters were different at the end: Raoul grew from a boy to a man (the stage-show excluded his older brother, whose presence made this more apparent, but still). The Phantom accepted his lonely fate and found his Catharsis. Christine grew out of her daddy issues (for the most part anyway-- she still married a "safe" guy). The experience was complete.

There is an almost insulting scene, where the music that's playing is "Twisted Every Way" from the original, when Christine's trying to choose between the Phantom and Raoul. The drama of the situation feels contrived and reminding us of her genuine conflict in the original (where she was trying to decide whether she'll just leave or sing and put her fucking life on the line) is not the smartest way to go about your inferior new material.

In "Love Never Dies" no development occurs and the archetypical form of the characters ranges from dull to downright flawed. The sociopathic Phantom is incomprehensibly nice to everyone and doesn't have any presence or impact on the story; he's just there, because it's in his contract or something. Christine suffers from the same, only with a slightly sluttier edge considering her irrational decision to fuck the Phantom on the night before her wedding (and I'll be quick to remind everyone that Christine never actually loved the Phantom, per the original story, in ANY interpretation). Raoul... oh poor Raoul. You've never been much of a character or even an antagonist (assuming the Phantom was the hero), but poor guy... He was noble and nice and rich. In this one, he's a gambling, drinking mess that doesn't even like his son and his resolution? The guy who sank his family neck-deep in gambling debt, places a bet on them and then walks away without so much as a goodbye, let alone an actual effort to fix his mistakes. Meg was a non-character in the original, but her instant switch to a jealous bitch that kills her best friend is a cop-out and her mother... Ah. Madame Giry was a mother-figure, to Meg, to Christine, even to the Phantom. That was her role-- she even goes as far as saying so in "Love Never Dies". But in this shitty sequel, she's far too concerned with expecting repayment from the Phantom in the shape of her daughter becoming a legendary star, the same way Christine once became.

Sorry, I said this would be a quickie and I started rambling. The point is, it's a very boring, unecessarily dark story, with unlikeable, one-dimensional characters. And, yes, if I were to lose my marbles over continuity, I'd be well within my rights to point out how this rapes the original. "Phantom of the Opera" is a very simple, but very familiar story about solitude and its inescapable nature. "Love Never Dies" in its premise alone negates that story, as it starts with the Phantom having been truly loved by Christine (and even if he left her, he was by no means alone anymore) and goes as far as giving him a son from her at the end.

Having said that, I'm only judging the story, not the show. Since I didn't see it and I base my account on the script and research, I don't know how pretty it may be. Maybe the spectacle's worth the ticket price alone. Maybe it's a lot more immersive than one would think. Not all is bad about it, after all; a few of the songs are not bad, even outside of the story's context and the actors are all great vocal talents.

Go see it. And then upload it on Youtube for those of us living in the less priviledged countries. But don't expect much good from it; stories that call for no sequel should not get a sequel. Especially not one 24 years later.
Αναρτήθηκε από GamelyPlanet στις 6:37 PM